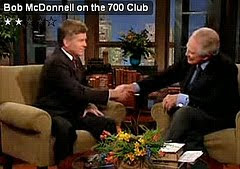 I noted this morning the controversy raging here in Virginia over proposed changes to the rules of the Department of Social Services that would clearly permit same sex couples to adopt or be foster parents (same sex couple adoption is currently a gray area where no express prohibition exists) . In addition, church affiliated and private adoption agencies would be barred from discriminating against gay parents. Needless to say, paid political whores like Maggie Gallagher and Victoria Cobb at The Family Foundation who cracks her whip over Bob "Taliban Bob" McDonnell and others in the Republican Party of Virginia like some Nazi dominatrix had their panties in a major knot over the concept of treating gay couples as potential responsible parents. Add to that the verbal diarrhea issuing from Delegate Bob Marshall - who has admitted that he'd like to drive gays from Virginia - and it was only a matter of time before McDonnell knuckled under and embraced religious based bigotry that would make Thomas Jefferson vomit. Here are highlights from the Washington Post on McDonnell's sell to the propaganda of today's successors to the Nazi stigmatization and denigration of LGBT citizens:
*
Gov. Bob McDonnell (R) told reporters at a Tuesday news conference that he opposes proposed regulations developed by his Democratic predecessor that would for the first time allow gay couples to adopt children in Virginia.
*
“I know I had said during the campaign that I would essentially keep our adoption laws -- which I think are good -- the way they are now,’’ McDonnell said. “I think the current regulations that are in place seem to be working well.”
*
Currently, only married couples and single men and women — regardless of sexual orientation — can adopt in Virginia.
*
The proposal, according to the governor’s office, would mandate that gay singles and unmarried couples be able to access faith-based groups, such as Catholic Charities and Jewish Family Services, to adopt children.
*
“I don’t think we ought to force Catholic Charities to make that part of their policy or other similar situated groups,’’ McDonnell said. “Many of our adoption agencies are faith-based groups that ought to be able to establish what their own policies are. Current regulations that say you can’t discriminate on the basis of race, color or national origin I think are proper. I think previous efforts to expand that to a number of other classes are going to have very strict scrutiny to make sure that we don’t inhibit the very fine work some faith-based organizations are doing.”
*
McDonnell has until April 16 to make a recommendation to the State Board of Social Services, a nine-member panel of which all but four members are holdovers from Kaine.
*
My suggestion - exempt the religious affiliated organizations, but only if they give up 100% of all state, federal and federal funding that they are receiving. They want the right to discriminate against citizens, then don't expect a single penny of public funds of any nature. Meanwhile, Bob Marshall - who I hope and pray gets caught some day in a Larry Craig like incident - does all he can to fan the flames of anti-gay hatred among the Kool-Aid drinker set. Here are highlights from The Advocate:
*
Bob Marshall (pictured), a member of the state house of delegates, wants Gov. Bob McDonnell to kill the measure, which Marshall calls a “radical antifamily proposal.” He claims it would allow unmarried couples, gay and straight, to adopt or foster children, something Equality Virginia disputes.
*
Marshall has said he is also concerned that faith-based agencies would have to place children with gay parents, in violation of their religious beliefs. In his letter to Sood, [[Equality Virginia's] Parrish contended that in placing children for adoption or foster care, these groups are acting as agents of the state, not engaging in private acts, as would be the case in employment decisions — and therefore they should be subject to anti-discrimination law.
*
It gets so tiresome living in Virginia where in all candidness, farm animals are given more consideration and legal protections than LGBT Virginians. Once again for those considering moving to Virginia, my advice is don't. And if you're already here, leave if at all possible.
Posted by Michael-in-Norfolk at Tuesday, April 05, 2011