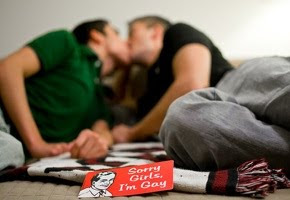 The Williams Institute at UCLA has released a new report on the number of LGBT citizens in the USA. The figures are a result of cross-referencing four recent national and two state-level population-based surveys and, in my view, are probably low because of the number of closeted individuals across the country - especially in the Bible Belt and states where LGBT citizens have few if any non-discrimination protections (e.g., social and intellectual backwaters like most of Virginia)- are in the category of the 25 million who admit same sex attraction. In addition, the figures do not include those under 18 years of age. Here are highlights of the report which can be found here:
*
Key findings from the research brief are as follows:
*
An estimated 3.5% of adults in the United States identify as lesbian, gay, or bisexual and an estimated 0.3% of adults are transgender.
*
This implies that there are approximately 9 million LGBT Americans, a figure roughly equivalent to the population of New Jersey.
*
Among adults who identify as LGB, bisexuals comprise a slight majority (1.8% compared to 1.7% who identify as lesbian or gay).
*
Women are substantially more likely than men to identify as bisexual. Bisexuals comprise more than half of the lesbian and bisexual population among women in eight of the nine surveys considered in the brief. Conversely, gay men comprise substantially more than half of gay and bisexual men in seven of the nine surveys.
*
Estimates of those who report any lifetime same-sex sexual behavior and any same-sex sexual attraction are substantially higher than estimates of those who identify as LGB.
*
An estimated 19 million Americans (8.2%) report that they have engaged in same-sex sexual behavior and nearly 25.6 million Americans (11%) acknowledge at least some same-sex sexual attraction.
*
The report itself recognizes that the figures may be low, but at least they provide some basis for addressing need policy changes and, of course, the provision of needed support. Here's a part of what the report says on under reporting:
*
Another factor that can create variation among estimates of the LGBT community is survey methodology. Survey methods can affect the willingness of respondents to report stigmatizing identities and behaviors. Feelings of confidentiality and anonymity increase the likelihood that respondents will be more accurate in reporting sensitive information. Survey methods that include face-to-face interviews may underestimate the size of the LGBT community while those that include methods that allow respondents to complete questions on a computer or via the internet may increase the likelihood of LGBT respondents identifying themselves.
*
The over all messages is that LGBT citizens are more numerous that the Christianists like to claim and that pretending otherwise leads to wrong headed policies and laws.
Posted by Michael-in-Norfolk at Thursday, April 07, 2011