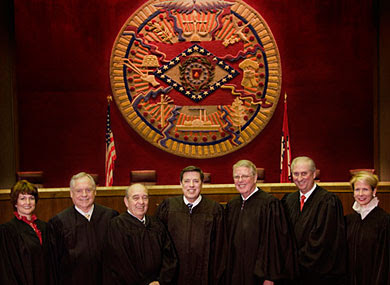 It is pretty sad when - and no disrespect to Arkansas - Virginia's Republican leaders appear to be poised to allow Arkansas to show a stronger reverence for equality and religious freedom than occurs in the home state of many of the brightest lights of the nation's Founding Fathers. Yet that appears to be what might well happen if Governor Bob "Taliban Bob" McDonnell and the Virginia GOP continue to be nothing more than tawdry whores to the likes of Victoria Cobb and similar religious extremists at The Family Foundation, Liberty Counsel and, of course, Taliban Bob's theocratic alma mater, Regent University. As The Advocate and many other news outlets are reporting, the Arkansas Supreme (the justices are pictured above) has struck down a 2008 state law that banned same sex and unmarried couples from adopting or foster parenting children. The ban had been approved by a state referendum. The ruling is a serious defeat for the Christofascists and underscores that merely because a bigoted majority wants to penalize a disliked minority, it does not make it right or constitutional. Meanwhile, here in Virginia we see the Christian Taliban faction endeavoring to block regulations that would make Virginia on a par with what is now legal in Arkansas. Here are highlights from The Advocate story:
*
The Arkansas supreme court ruled Thursday that a 2008 ballot initiative that barred gay and lesbian couples from adopting children was unconstitutional. The court ruled that such a policy, while never enforced, would violate an adult's right to privacy in their bedroom,. .
*
"Act 1 directly and substantially burdens the privacy rights of 'opposite-sex and same-sex individuals' who engage in private, consensual sexual conduct in the bedroom by foreclosing their eligibility to foster or adopt children," Associate Justice Robert L. Brown wrote. The court also wrote that imposing a categorical ban on anyone who was not in a heterosexual marriage from adopting or fostering children, would keep many children away from suitable, responsible homes.
*
The ruling leaves Mississippi and Utah as the only two states that enforce adoption bans on unmarried couples, according to the Human Rights Campaign. The Virginia State Board of Social Services is also expected to decide whether to approve former governor Tim Kaine's proposed policy to prevent discrimination based on family status by child welfare agencies in the adoption process. Gov. Bob McDonnell has until April 16 to present his own suggestions to the board, but he has indicated that he opposes such regulations.
*
Of course, in truth, the Christianists care nothing about children in need of stable and loving adoptive or foster homes. No, it's truly all about punishing gays (and in this case unmarried couples) who do not tow the line and live their lives per Christianist dictates. It's religious based discrimination pure and simple when all of the smoke screens are stripped away. Should Taliban Bob torpedo gay adoption rights in Virginia, it will be indicative that he's unfit to hold the office of Governor much less any higher office since he is acting contrary to the Virginia and United States Constitutions each of which grant ALL - yes, that means gay and straight - citizens the right to freedom of religion and protection from religious based discrimination some would attempt to write into the civil laws.
Posted by Michael-in-Norfolk at Thursday, April 07, 2011