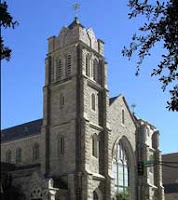 Why anyone gay would remain in any kind of affiliation with any aspect of the Roman Catholic Church dumbfounds me. The institutional Church is corrupt, homophobic and the hierarchy is full of phony hypocrites from the Pope on down. It is like a Jew joining the Nazi Party in 1930's Germany. Yet, gays continue to act against their own best interests and remain affiliated with the Church, which in my view, can only serve to damage them emotionally and psychologically and possibly lead to foolish, self-destructive actions such as in this case. And what is with these idiots who engage in sex in public places or property other than their own? How stupid can one get? Here are highllights from WCBS-TV:
*
GREENBURGH, N.Y. (CBS) ― A Westchester County Catholic school principal is in serious trouble after he was arrested for allegedly going on a naked sexual romp with two other men in the backyard of a vacant home in the Orchard Hill section of town on Sunday. Gabriel De Jesus, 41, of Ossining told police he was the principal of Sacred Heart School for the Arts, a Catholic elementary school at 71 Sharpe Blvd. in Mount Vernon.
*
Authorities said DeJesus, Francesco Autera, 31, of Thornwood and another man met online. The trio allegedly picked the backyard of a vacant Abbeyville Lane home to conduct their group sex. An alert neighbor called 911 after noticing something suspicious.
*
Police found DeJesus and Autera naked and arrested both. They are charged with misdemeanor trespassing, public lewdness and disorderly conduct. The third man ran naked down the street before he could be apprehended, according to police. The New York Archdiocese said it is looking into the matter and plans to speak with police. Officials add that DeJesus has been a well-regarded educator up until this point.
Posted by Michael-in-Norfolk at Tuesday, July 15, 2008

Oh for pete's sake! Just let the poor man be gay and he can continue to be a well-regarded educator. Allow him to practice his sexual preferences without fear of shame or retribution and he can do it in his own home without freaking out the neighbors. (hopefully)
I feel sorry for the guy, and the two others with him.

Per reports today, he has been forced to resign as principal. I do feel sorry for anyone who is discriminated for being gay. But, I still have to wonder what were they thinking when they did it anywhere but in the privacy of one of their homes? Had they done that, nothing would have happened to them.