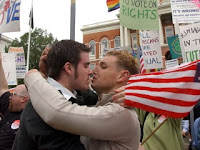 There is an interesting op-ed in the Detroit Free Press that looks at what Michigan has brought on itself through some of its discriminatory policies in terms of economic harm. The piece is especially timely with the auto industry making additional cuts in employment and closing more plants. Studies have shown that money, talent and creativity (the so-called creative class) flock to cities and regions that embrace diversity and tolerance. Sooner or later, this will bring tangible benefits to these locales and their citizens. A case in point is in the opposite direction is Alabama where I lived for four years from 1977-1981. After having been gone from the state for over 20 years, when I went back in 2005, I found a state that seem far more conservative and backwards than in the early 1980's. This seems to directly track the rise of the stranglehold of the Christian Right over the political landscape - e.g., think Judge Roy Moore. While I had always thought Alabama to be conservative when I lived there, I had never seen it as downright backwards and reactionary. In 2005, my view had altered and I doubted whether I could ever live in the state again. I still believe the state has great potenial, but it will never achieve what it otherwise could until there is a radical shift in the prejudiced and discriminatory mindset that goes hand in glove with conservative Christian control of the political machinery of the state. Here are some highlights from the op-ed column:
*
As far as I can tell, no reputable pollster has taken our state's temperature on gay marriage since 2004, when Michigan voters overwhelmingly opted to outlaw it. But I've a hunch that at least a few thousand of those who voted to ban same-sex unions just four years ago would happily pony up for a mass wedding ceremony at Comerica Park if enough creditworthy gay couples could be found to purchase all their houses today.
*
Tread water long enough and you're bound to become a little less particular about who tosses you a lifeline. God may not have created Adam and Steve, but if that happy couple opened a factory in southeast Michigan, I know a whole lot of straight guys who'd be willing to work in it. Of course, gay home buyers and entrepreneurs have been even less likely than straight folk to invest their hard-earned dollars here since Michigan voters went out of their way to let same-sex couples know they weren't welcome -- as if economic stasis and long winters weren't disincentive enough.
*
Today, as Michigan stews in its own family values, other economically pinched states are competing for gay favor. In California, the public backlash against a state Supreme Court ruling legalizing same-sex marriages is being tempered by the recognition that gay weddings are a growth industry.
*
As Michigan wages a mostly unsuccessful struggle to retain good jobs and well-educated workers, its policy of excluding gays (or exempting them from rights and privileges enjoyed by other citizens, which is the same thing) looks stupider with each passing day. What, exactly, have we accomplished by erecting one more obstacle to fresh talent and investment? (And please don't talk to me about protecting Michigan's children; they're bailing faster than anyone.)
*
To the rest of the world, running gay couples out of the state is of a piece with banning stem cell research and building trucks no one wants to buy. Banning same-sex unions has done less to preserve marriage than it has to reinforce Michigan's retrograde image. Repealing Michigan's ban on gay marriage wouldn't solve unemployment, end the foreclosure crisis or restore medical benefits to retired autoworkers. And it wouldn't transform Detroit into a world-class city, or even a sustainable one. But it would be a signal -- the first in many years -- that Michigan had given up trying to barricade itself against the future and begun, however tentatively, to embrace it.
Posted by Michael-in-Norfolk at Saturday, July 19, 2008