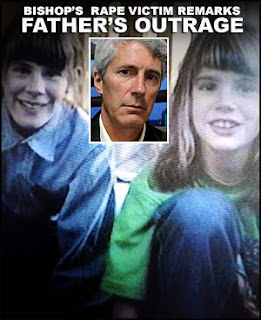 As the disingenuous Pope Benedict XVI feigns sorrow (yet refuses to give a formal apology) for the sexual abuse of children by priests in Australia, the Roman Catholic Church continues to receive deservedly bad news coverage. First, in Denver, Colorado, the Catholic Archdiocese has been hit with yet another lawsuit by the victim of a priest who was to to superiors to be a sexual predatory, but nonetheless allowed to remain a priest and shuffled off to another parish where he molested more children. Then, there are the parents of two Australian girls repeatedly raped by a Catholic priest - one girl later committed suicide - who are questioning the role of Bishop Anthony Fisher as coordinator of World Youth Day since he fails to have any regard for the victims of abuse or their families. Personally, I find the hypocrisy and false piety of Benedict and pretty much all of the Catholic clergy to varying degrees enough to make one vomit and want to become an atheist.
*
One would think some lay Catholics and laity controlled organizations would wake up to the cesspool the Church has become and demand change and that the Pope clean house of the bishops and cardinals who enabled or covered up the sexual abuse of children. Instead, we see the increasingly servile Knights of Columbus worrying about gay marriage and giving $250,000 to support passage of Proposition 8 in California. The Knights are allegedly - and I use the word allegedly deliberately - a fraternal organization with a goal of protecting widows and children. One would think the molestation of children by priests would be a more serious threat to families than gay marriage under the civil laws. Yet now fawning over clergy who enabled and/or covered up the sexual abuse of children has become a "family value" under the lunatic leadership of the Knights. Neither they nor the Church hierarchy give a rat's ass about children or truly protecting families from sexual predators and their enablers. Moral bankruptcy dose not even begin to describe the situation. Here are some highlights from the Washington Post:
*
DENVER -- A man sued the Roman Catholic Archdiocese of Denver on Tuesday over sexual abuse after seeing documents released as part of a big settlement last month that name the same priest he says molested him as a teenager. The accuser claims he was abused by the late Harold White, an ex-priest who was named in the bulk of the cases that were settled this month. White was removed from the ministry in 1993 and died in 2006. The lawsuit claims the abuse occurred in 1969 or 1970 at St. John the Evangelist Church in Loveland when the plaintiff was 14.
*
According to the suit, the documents _ posted on the firm's Web site _ show White had admitted in February 1961 to sexually molesting five or six children. That was seven years before he was moved to St. John's. . The archdiocese has settled 43 sex abuse cases since 2005 for a total of $8.2 million. Under the settlement reached this month, the archdiocese agreed to pay $5.5 million. Two other lawsuits besides the new one remain unresolved.
*
Then from the Sydney Morning Herald come these highlights:
*
The father of two girls repeatedly raped by a Melbourne priest has questioned the credibility of Bishop Anthony Fisher and his role in the Catholic church and World Youth Day (WYD). Bishop Fisher, who is WYD coordinator, yesterday said media attention paid to the abuse of sisters Emma and Katherine Foster was detracting from the positivity of the massive Catholic youth festival under way in Sydney.
*
The couple is seeking an audience with Sydney Archbishop Cardinal George Pell to discuss the church's handling of priest Kevin O'Donnell's rape of their daughters when they were in primary school. O'Donnell died in prison about 10 years ago, and the Fosters have accused Dr Pell of stalling their compensation claim. Emma Foster committed suicide this year at the age of 26, while her sister Katherine drank heavily before being left disabled when hit by a drunk driver in 1999.
*
In the statement he prepared for media waiting at the airport, Mr Foster said Bishop Fisher should be ashamed. "I would like to address the outrageous comments and attitude of Bishop Anthony Fisher, which we have found to be endemic to people unaware of the impact of sexual assault," he said in the statement. "The ... 'old wounds' he speaks of, never heal and victims of sexual assault suffer all their life.
*
Truth be told, the Pope and the hierarchy care only about three things: money, power and good PR. The welfare of children and/or their families are nowhere on the radar screen.
Posted by Michael-in-Norfolk at Wednesday, July 16, 2008