Mormons Excommunicate Creator of "Men On A Mission" Calendar 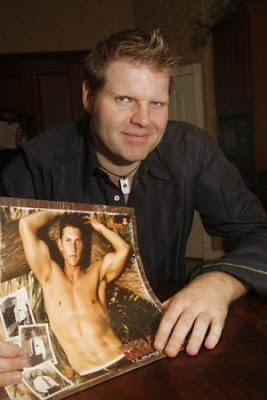 I have actually posted photos of some of the guys from the "Men On A Mission" calendar which featured shirtless Mormon missionaries on this blog, so I was somewhat sad to hear that its creator, Chad Hardy, was excommunicated Sunday after a disciplinary meeting with local church leaders in Las Vegas. Personally, I thought all of the photos were tasteful and pretty tame compared to some of the other G-rated photos I use that push the envelop a bit. In my opinion, the calendar actually helped make Mormons look like more normal people as opposed to the more lunatic members of the church that typically get all the media attention. In any event, here are a few highlights from Salt Lake City Tribune:
*
SALT LAKE CITY - The creator of a 2008 calendar that featured shirtless Mormon missionaries was excommunicated Sunday after a disciplinary meeting with local church leaders in Las Vegas. Chad Hardy says he bears no ill will toward the council of elders from The Church of Jesus Christ of Latter-day Saints. He says an official letter severing his ties with the 13 million-member Salt Lake City-based church should arrive in about two weeks.
*
''Men on a Mission," which has sold nearly 10,000 copies at $14.99 each, included pictures of 12 returned missionaries wearing black slacks, but not their trademark white shirts, in modest poses. The men are also photographed in traditional missionary garb and share their religious beliefs in biographical sketches. Some of the 12 models have also been called to disciplinary meetings, but none were punished.
*
Hardy said he considered resigning his membership to avoid the hearing, but decided against it out of respect for his family. Hardy is a sixth-generation Mormon. His parents live in Utah. ''I really feel sorry for my family," Hardy said. ''They are going to be so sad. But I feel empowered and free and I feel like I no longer have to apologize for anything." Hardy insists that the purpose of the calendar has never been to tear down the church or its 13 million members.
*
The 2009 calendar - which drew 100 inquiries from interested missionaries - will be released in September.
Posted by Michael-in-Norfolk at Monday, July 14, 2008