I mentioned in an earlier post about the hot frat boys at Club216 my fraternity days at UVA. Below is a photo of the Zeta Psi - Beta Chapter, University of Virginia fraternity house on Rugby Road in Charlottesville. I have always thought the Zeta Psi house is one of the most beautiful of the fraternity houses at UVA. As can easily be seen the design of the house uses style elements from Monticello. As it turned out, it was not the best fit for me,: a liberal New Yorker compared to the many guys from wealthy Deep South families (Edward Ball, the cousin of two of my Zeta Psi frat brothers, in fact, wrote a book Slaves in the Family, about their family). We came from very differnt worlds. Ultimately, I went inactive and became an unofficial brother at the rival Kappa Sigma house (the first American chapter of Kappa Sigma was wounded at UVA in 1869) literally next door which had a number of guys in it from Virginia Beach, including my friend Henry Oldfield who would end up being my best man when I married. Obviously, being gay and struggling so hard to suppress it made fraternity life a struggle as well. 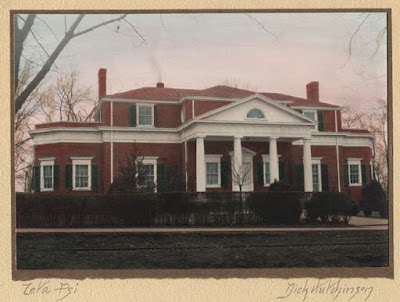