The Making Of Me 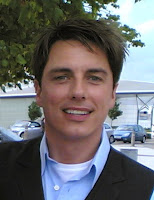 In a new BBC program, The Making of Me, John Barrowman (who not is only gorgeous in my opinion, but also a poster boy for the UK's "Gay is OK" campaign) among other things undergoes "a series of tests including a DNA examination that is compared with his straight brother's to try out a theory that the origin of homosexuality is linked to events in the womb that may affect the foetus." I applaud Barrowman for doing the show and, hopefully, it will help wake some people up to the fact tat despite the "choice myth" propounded by the liars of the Christian Right, sexual orientaion is not something we choose.
*
In fact, from all my reading and e-mail exchanges with experts and even a telephone conversation I had with Linda Titus-Ernstoff, a Professor in the Department of Community & Family Medicine, Section of Biostatistics & Epidemiology, at the Dartmouth-Hitchcock Medical Center who has done research on DES - which my mother took while pregnant with me - and has been written up in the Washington Post for her research, everything that I have been able to find points to sexual orientation being largely fixed in the womb. That is clearly what Linda Titus-Ernstoff told me she believes when we spoke back in 2003 even though the mechanism of how it occurs has still not been fully determined. In any event, here are some hights about the show and Barrowman from the Guardian:
*
Handsome, charming and openly gay, actor and presenter John Barrowman has become one of the best-loved faces on British television. But, as he explains to Alice Wignall, success has brought unexpected responsibilities. . . . The results of the programme - is it nature, is it nurture? - are a closely guarded secret, though Barrowman has always been convinced that sexuality is not a choice. "I've always known who I am," he says. "That's what I believe. I feel I was born this way. I've never questioned that."
*
But the recent escalation of his fame has put him in a position where he senses an obligation to do more. "I have to put it this way," he says. "There are some days that I sign, like, 400 pictures, autographs and stuff. And among those I generally get a bunch of, say, four, five emails and some written letters from young men and women who are struggling to come out of the closet and they don't know who to turn to because they're afraid of their family's reaction and they're afraid of their community's reaction. So when they approached me to do this [The Making of Me], I thought, 'Yeah, you know, I really kinda have to do it.' I do think I've got a responsibility to help change perceived attitudes or try to change them."
*
"I was doing a signing at a convention," Barrowman says, "and this father brought his son over and he said, 'Do you want Captain Jack's autograph?' and the kid said, 'Yeah, Dad, I don't care if he likes boys, he's still my hero.' And I thought, 'That's why I'm doing this.' "I'd love to be a hero and that's why I love playing him, because he is a hero. But then, funnily enough, people have written to me and said I am their 'hero'" - he says the word with self-deprecating verbal air quotes - "because of standing up for what I believe in".
Posted by Michael-in-Norfolk at Wednesday, July 16, 2008