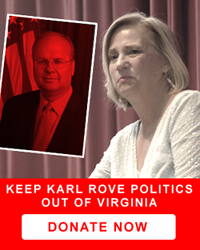 UPDATE: Apparently Thelma and Karl will have some company on Friday. I received this blast e-mail via a Democrat site:
*
Mock Trial of Karl Rove to be held at Virginia Beach Town Center FountainFriday, July 18, 2008 11:30 a.m. Mock Trial of Karl Rove to be held at Virginia Beach Town Center FountainFriday, July 18, 200811:30 a.m. Local concerned citizens are staging a mock trial of Karl Rove in front ofRuth's Chris Restaurant where he will be hosting a fundraiser forCongresswoman Thelma Drake. We are inviting all local press to coverour fun event. All are invited to participate or be an observer. Bring signs if you'd like.
*
As I have indicated on a number of occasions, I have known GOP Congresswoman Thelma Drake for over a decade and while I have I have often not agreed with her political positions, I have always respected her as a person. Particularly, since of all the elected GOP officials in Virginia Beach - including current Virginia Attorney General Bob "Taliban Bob" McDonnell - Thelma was the only one who apologized for the mistreatment I received when I warned all of them roughly 8 months before he was outed by Mike Rogers that Congressman Ed Schrock was a closet case and that he would ended up being outed due the the GOP anti-gay jihad. However, now I HAVE to condemn her for having a fundraiser on Friday, July 18, 2008, at the Ruth's Chris in Virginia Beach with KARL ROVE as the guest of honor. Save for the Chimperator and Emperor Palpatine Cheney, I can think of few more disgusting and amoral figures than Karl "Turd Blossom" Rove. The man will say and do anything no matter how low and harm anyone in his thirst for power. As I said, in my opinion, the man is truly amoral and hopefully will be found guilty for contempt of Congress and incarcerated. Here's what Thelma's campaign website is saying:
*
11:15 a.m. Roundtable discussion & Photo-Op with Karl Rove 12:00 – 1:15 p.m. Luncheon. Karl Rove remarks followed by Q & A Please make reservation by faxing this form to 757-491-7143 or call 757-491-7141 or mail this form with your personal check made out to: “Thelma Drake for Congress” and mail to Thelma Drake for Congress, P.O. Box 61480, Virginia Beach, VA 23466.
*
Honestly, I don't know what the Hell Thelma was thinking. Not surprisingly, the Democrat Party of Virginia has seized on this decision to launch a fundraising campaign seeking contributions for Thelma's Democrat challenger, Glenn Nye. I do not know who is advising Thelma, but to me, this was an incredibly stupid decision which only serves to underscore her blind lockstep voting record of supporting the Chimprerator and his ill conceived policies almost 100% of the time. Fortunately, Thelma had the sense to override the Chimperator's veto of the Medicare Bill today. Nonetheless, that does not excuse her for being seen with Rove this Friday.
Posted by Michael-in-Norfolk at Tuesday, July 15, 2008