Though Lovers Be Lost... 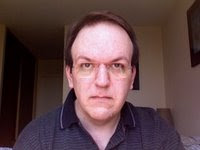 My reader and friend, Jim at Though Lovers Be Lost, has said very kind things about me and another gay dad in his post on gay fathers (just about bringing me to tears, in fact). While Jim and I live nearly 700 miles apart and have never spoken, through comments on each other's blogs and email exchanges from time to time, he's become a very supportive friend.

The wonder of the blogosphere is that individuals around the world can share their stories and touch others who may be going through issues and need to know that they are not alone. I thank Jim and others whom I interact with for being there and for your wonderful thoughts, sensitivity and inspiration.
Here's the link to the other blogger honored by Jim's kind words: http://cooperscorridor.blogspot.com/
Posted by Michael-in-Norfolk at Sunday, June 17, 2007

i think the blogsphere is a great network of support. without it, i don't think i would learn as much about myself and others. it has helped me understand my issues to a greater degree that i would not had achieve in real life (as i don't have a group of gay friends to support).
the world has become a smaller place. i've learnt to see that my initial perception of "gay is all about sex" was wrong.
go the bloggers!

Your perspicacious observations are both troubling and promising. One of my chief concerns is not the blogosphere, which is wonderful, expressive, varied, informative, connecting, etc. Rather, it's that the blogosphere is replacing all other venues, not being "added to them." My own town of San Francisco has "dropped" from more than 150 venues circa 1970 to 10-20 today, in what surely must be one of the densest gay populations on earth.

Smartly, we chose to suspend bathhouse operations back in the early 1980s due to AIDS, so that drops about 20-30 venues from the original 150. Where did the other 100 go? Answer: Internet Hook Ups.

Whatever else the merits or demerits of Hook Up Sites, one of the clearest demerits is the "loss of community." In bygone days, one did not trick with everything that walked and talked, but in the "hunt," we met lots of wonderful "acquiantances," largely known by face, maybe first name, but we could chat, wink, diss, gossip, hang-out, are just get plowed. One could not walk down the street with manifold smiles, winks, "hellos," "hi," crotch-shots, etc.

That sense of "social awareness," of "community presence," of others in physical proximity, of others like us (or not), from every state, nation, tribe, background, always someone worth exploring for the sake of exploring him as the individual he is (with no necessary "implications" or commitments, although subject to change without notice.)

If we had not beheld each other in physical proximity, ran into each other to and fro, we would never have felt our strength in numbers, a shared solidarity, a common interest, or elect the nation's first openly "gay" official. And in those "numbers," one still would have found and retained his individuality.

Now, media puts caricature "substitutes" as token gays for a laugh, the world falsely assumes we're "everywhere," and the Phelps of the world actually believe there is a Homosexual "Fag" Agenda.

Once-annual Pride events, which brings millions into the streets, is not sufficient. We still need to "meet, encounter, chance," not live by txt mssg hook ups alone. As one Sage was said, "Man does not live by Bread/Cock alone." Substitute, PC, for "bread/cock," and that message still resonates. If humans are immensely diverse and pluralist, shouldn't our venues reflect that diversity?