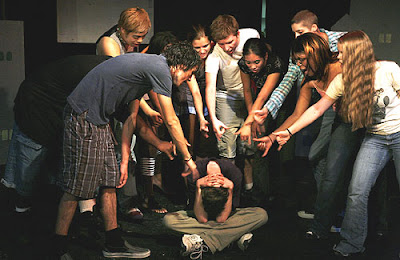 Raymond and I attended a performance of Pet Sounds - the Granby High School student written and produced musical that was not allowed to be staged at the school because it dealt with homosexuality, among other issues - last night. The show was incredible and the talent of these students was amazing. The 40th Street Stage that hosted the show is a quirky venue in a former warehouse and not exactly a London West End theater like the one I experienced some years back, but it all worked marvelously.
Since the show was a musical using the music of Petula Clark, not only was acting skill required, but musical, choreographic and dancing talent as well. We had to keep saying to ourself "I cannot believe these are just high school students." The show not only addressed the issues faced by gay students, but also many of the other issues faced by high school teenagers, ranging from racial issues to the universal quest for acceptance and discovering one's self. In my opinion, not only should the show have been required viewing for all students, faculty and staff at Granby High School, but also for every resident in this area over the age of 13 or 14.
I cannot say enough praise of the students - some of whom definitely deserve a future in the big league - but for their drama coach as well. It was a job truly well done.
Posted by Michael-in-Norfolk at Saturday, June 23, 2007