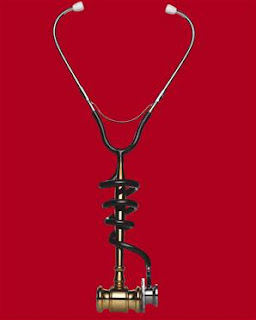 A new story on MSNBC.com (http://www.msnbc.msn.com/id/19190916/) discusses the growing number of situations where physicians and others in the medical community feel that they can refuse various medical treatments if they violate the physician's personal religious beliefs. The article sets out various examples where completely legal treatments were denied due to doctors' religious beliefs on matters ranging from contraception, morning after pills, single parent adoptions, to gay adoption. Worse yet, several examples were in small town emergency rooms at perhaps the sole local hospital.
Personally, I am beyond over the Christianists trying to make everyone else live by their beliefs. Moreover, it is one thing for a doctor in private practice to refuse treatment, but something very different in a hospital emergency room setting, particularly if it is the only local hospital. If you are an ER doctor and are not willing to provide all legal treatments to patients, get a different job. Plain and simple.
Locally, there are two local hospital systems - one secular and the other part of a Catholic hospital system network. From my own experience, I know the secular hospital network accepts gay medical powers of attorney, etc. However, I advise my LGBT clients to avoid the Catholic hospitals because of problems other members of the LGBT community have described to me. Based on local news reports, one of the Catholic hospitals is in financial trouble and wants to downsize operations. Meanwhile, the hospital makes it self unwelcoming to a whole segment of the local community.
Posted by Michael-in-Norfolk at Friday, June 22, 2007

I guess that thing about healing all who enter their doors is just so much empty language.

That concerned me when my doctor's practice got swallowed up by a catholic hospital here in Toronto. I keep waiting for them to get shut down all together, seeing as the hospital they used to be associated with was closed down by the province who then sold the land to a condo developer. Sigh.

This boils my blood, too.

If someone wants to be a physician, s/he takes the Hippocratic Oath, the first tenet of which, is "do no harm." In our axiological systems, the sole "moral imperative," is "do no harm." All other "moral" claims are subjective, but the moral imperative to "do no harm" is categorical, proscriptive, universal, self-evident, and without exception. Our entire system of justice, hopefully, is predicated on this very moral principle.

Ergo, (i) all medical providers of every kind, and (ii) all individuals of every kind, have a moral duty, obligation, and responsibility to "do no harm." One cannot "opt-out" because of some silly superstition, an absurdly fallacious "natural law theory," or because some deity forgot the sole moral duty in his Ten Commandments, Beatitudes, and Dietary Laws. While the "Golden Rule" is Empathy (Benevolence) Maximized (not specifically a moral duty), if it has any force in any venue, it must at its very minimum hold "do no harm." How can one "do to others as one wants done to oneself," and then allow oneself to be "harmed?"

Alas, god forgot the Moral Imperative of Do No Harm, but the Greeks sure as hell didn't. And, Aquinas's conflation of (i) natural teleology from Aristotle's Physics, with (ii) Aristotle's instrumental reason from the Nichomachean Ethics, is well-known as the Naturalistic Fallacy (see, www.positiveliberty.com for discussions of this important fallacy).