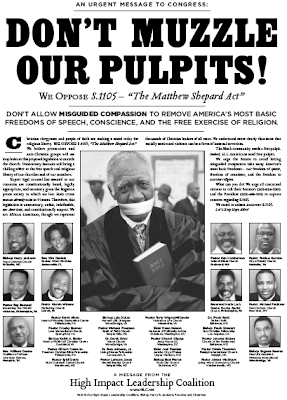 As Pam's House Blend reported (http://www.pamshouseblend.com/showDiary.do?diaryId=2051), Bishop Harry Jackson, the homobigoted head of the High Impact Leadership Coalition is fretting about the power of the Homosexual Agenda and pending hate crimes legislation in his column "Why Do Gays Hate Religious Freedom?" that appeared on Townhall.com recently. Here's part of his shrill screech:

...Both gays and blacks should get justice in America, but we cannot allow either group to receive special privileges at the expense of another group of Americans. If the loopholes in this legislation are not closed, Christians and Bible-teaching churches could become victims of a strange brand of reverse discrimination. These actions are tantamount to the gay community saying, "Freedom for me, but bondage for you." This attitude is just not consistent with America's ideals.
As I have stated before, these allegations are a flat out lie. Also note, this is the same story line put out by lily white Focus on the Family, Exodus, Family Research Council, Traditional Values Coalition, Mission America, etc. Having monitored these Christianist groups for a number of years, what gets me about these black ministers is that they are being cynically used by the same fundamentalist Christians who, while quoting the Bible, were against ending slavery, against desegregation, against interracial marriage (see my post on Mildred Loving's quote of the judge that found her guilty), and so on. They are NOT the friends of non-whites.
These preachers are basically showing their utter ignorance of history and the antecedents of these very same white Christianist organizations by playing into the hands of the Christianists. True, these Christianists are anti-gay, but they also are anti-people of any color other than white. Who in the GOP do you think is leading the anti-immigrant charge. Immigrants - especially Mexicans and Muslims - are non-white and non-Protestant fundamentalists and, therefore, not wanted. In addition, AIDS is one of the greatest plagues in the black community in the USA and in this area, yet who are the homophobes that keep blacks in the closet and on the down low - the black ministers. They just do not get it.
These ministers are being used just as many Jewish Americans are being used by these Christianists. Yes, the Christianists are currently pro-Israel, but it's because they think Israel is key to triggering Armageddon in the near future, when all but 100,000 Jews will perish. With friends like these folks, do you really need enemies?
Posted by Michael-in-Norfolk at Thursday, June 21, 2007