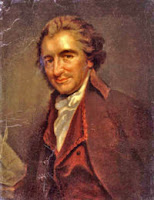 Thomas Paine is sometimes referred to as the Forgotten Founder. His pamphlets Common Sense and The Crisis mobilized the colonialists to rebellion and then sustained them when all appeared lost. He certainly is not a founding father who fits the myth put out by today's Christianists about the founders of the USA. Here are a couple telling quotes:
Revelation, therefore, cannot be applied to anything done upon earth of which man is himself the actor or the witness; and consequently all the historical and anecdotal part of the Bible, which is almost the whole of it, is not within the meaning and compass of the word revelation, and, therefore, is not the word of God.
All national institutions of churches, whether Jewish, Christian, or Turkish, appear to me no other than human inventions set up to terrify and enslave mankind, and monopolize power and profit.
I believe in one God, and no more; and I hope for happiness beyond this life. I believe the equality of man, and I believe that religious duties consist in doing justice, loving mercy, and endeavoring to make our fellow-creatures happy.
I saw the exceeding probability that a revolution in the system of government would be followed by a revolution in the system of religion. The adulterous connection of church and state, wherever it had taken place, whether Jewish, Christian, or Turkish, had so effectually prohibited, by pains and penalties, every discussion upon established creeds, and upon first principles of religion, that until the system of government should be changed, those subjects could not be brought fairly and openly before the world; but that whenever this should be done, a revolution in the system of religion would follow. Human inventions and priest-craft would be detected; and man would return to the pure, unmixed, and unadulterated belief of one God, and no more.
Not exactly the stuff Daddy Dobson and the other loud mouth Christianists would have their duped followers learn about since they seek to revert back to the system Paine so strongly condemned. More than 200 years ago, Paine had Dobson, et al, pegged for their true agenda.
Posted by Michael-in-Norfolk at Saturday, June 23, 2007