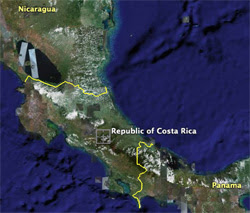 The list just keeps growing of countries that are coming to recognize the inequality afforded gay citizens:

SAN JOSE, Costa Rica (Reuters) - Costa Rican opposition lawmakers proposed legalizing same-sex civil unions in a bill introduced on Tuesday, but said it may be difficult to pass the plan in the strongly Roman Catholic country.

Under the proposal, same-sex couples would be granted marital-type rights like bereavement leave, inheritance and power over medical decisions. It stops short of recognizing same-sex marriage or allowing adoption by same-sex couples.

"This is a bill that guarantees the respect and tolerance for couples that are of the same sex," said bill co-sponsor, Andrea Morales of the main opposition Citizens Action Party.

Admittedly, it will be an uphill battle and I am sure the Catholic Church will pull out all the stops to pressure legislators to vote against the proposal, all the while failing to punish the Church's bishops and cardinals who covered up the sexual abuse of children by priests. Why does the word hypocrites spring to mind? So now Costa Rica is more progressive than Virginia.
Posted by Michael-in-Norfolk at Wednesday, June 20, 2007