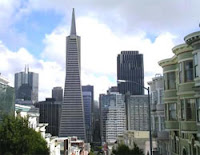 The Raw Story has a new story (http://rawstory.com/news/2007/Study_Gayfriendly_cities_enjoy_more_economic_0623.html) on a new Florida funded study that shows that the more "gay friendly" a city, the more prosperous it is. I guess this explains why large areas of Virginia are not that prosperous. It's one reason why HRBOR was formed: to help move Hampton Roads into a more accepting and prosperous mode. Here's portions of the story:

Richard Florida, a professor from George Mason University and author of the book The Rise of the Creative Class argued that the more "gay-friendly" a city is, the more economically prosperous it will be.
In his March 2007 paper "There Goes the Neighborhood," Florida uses something he calls the "Bohemian-Gay Index" to demonstrate that "artistic, bohemian, and gay populations" have a "substantial effects on housing values across all permutations of the model and across all region sizes." He also found that more open and "gay-friendly" areas generally support higher income levels.
Florida said he thinks it is the open mindedness of these cities that has allowed economically successful communities to emerge, rather than prior economic success attracting open minded people.
Someone needs to get this message through to the Virginia General Assembly!!! Based on this study, the legislators are doing the exact opposite of what will make the state more prosperous.
Posted by Michael-in-Norfolk at Saturday, June 23, 2007

Or is it that it's the gay community themselves that drive the prosperity in terms of their own personal affluence as a community?

For example, in Manchester UK, the 'gay village' became what it is today (affluent, bohemian and highly desirable property wise) because gay people bought up cheap properties, renovated them and eventually property companies moved in on the action as did larger bars / drinks companies etc etc.

God,that was a long sentence with little punctuation but it's late!! Ha ha.

This certainly is true in Sydney and Melbourne. The gay districts here are always packed with designer boutiques, affluent home wares, coffee shops and restaurants.

Roll in the pink dollars :-D

Now I am annoyed. I was planning to do an independent study next year on this very issue. Crap. Oh, but good, too.