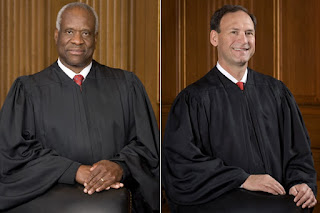 Recently, on Facebook I saw a post that more or less stated that one is privileged if one has not had to rely on a U.S. Supreme Court ruling for one's civil rights, something LGBT Americans know about all too well. Which brings me to the seeming growing threat to same-sex marriage equality, something the husband and I have enjoyed since April, 2014.  Among the Christofascists, the rights we enjoy are an affront to their right to demean and discriminate against LGBT citizens.

Now, in a statement issued in conjunction with the Supreme Court's decision to reject the appeal of Kim Davis, a former county clerk in Kentucky who gained notoriety in 2015 for refusing to issue marriage licenses — both to same-sex couples and opposite-sex couples based on her "religious beliefs" Justices Thomas - the mental midget of the Court who should never have been confirmed in my view - and Justice Alito declared war on same-sex marriage and raise the specter of the overturning of Obergefell v. Hodges, which extended marriage equality nationwide.  The basis for the declaration of war is that Obergefell allegedly intrudes on the "religious liberty" of Christofascists.  The irony, of course, is that religion is a man-made construct (e.g., the evangelical loved King James version of the Bible was a political settlement pushed through by England's homosexual monarch) while science and medical knowledge confirms that sexual orientation is an intrinsic, immutable characteristic - a God-given trait, if you will.   It is yet another attempt by right wing bigots and extremists to put fabricated religious dogma over scientific reality.  Should Catholic extremist Amy Coney Barrett win confirmation to the Supreme Court - personally I am hoping for more Covid+ diagnoses among Senate Republicans - the threat to LGBT civil rights will be magnified.  A piece in the Washington Blade looks at this threat.  Here are excerpts:

A fiery and unexpected statement from U.S. Associate Justices Clarence Thomas and Samuel Alito Monday signaling their intent to undermine the Obergefell decision is raising questions about whether marriage rights for same-sex couples are in danger, especially with the possible addition of Amy Coney Barrett to the U.S. Supreme Court.

The statement, which is irregular and completely voluntary, was made in response to the denial of a petition to review the case of Kim Davis, a former county clerk in Kentucky who gained notoriety in 2015 for refusing to issue marriage licenses — both to same-sex couples and opposite-sex couples — based on her religious objections to Obergefell v. Hodges.

Thomas, in a statement co-signed by Alito, writes he concurs with the decision to deny review of the case, which has been percolating through the judiciary for some time, but says her request “provides a stark reminder of the consequences of Obergefell.”

“By choosing to privilege a novel constitutional right over the religious liberty interests explicitly protected in the First Amendment, and by doing so undemocratically, the Court has created a problem that only it can fix,” Thomas writes. “Until then, Obergefell will continue to have ‘ruinous consequences for religious liberty.’”

Thomas criticizes the Obergefell decision, accusing the majority of impairing religious liberty and belittling the views of objectors who oppose same-sex marriage on religious grounds.

“It would be one thing if recognition for same-sex marriage had been debated and adopted through the democratic process, with the people deciding not to provide statutory protections for religious liberty under state law,” Thomas said. “But it is quite another when the Court forces that choice upon society through its creation of atextual constitutional rights and its ungenerous interpretation of the Free Exercise Clause, leaving those with religious objections in the lurch.”

The willingness of two justices to signal they would to seek overturn precedent for marriage equality five years after it was established was a shock to observers who thought the issue had been resolved. Even President Trump has said he’s “fine” with the decision and thinks the matter “settled.”

Alphonso David, president of the Human Rights Campaign, said in a statement the message from Thomas and Alito “proves yet again that a segment of the Court views LGBTQ rights as ‘ruinous’ and remains dead set against protecting and preserving the rights of LGBTQ peoples.”

“From eliminating hospital visitation rights and medical decision-making in religiously affiliated medical centers to granting businesses a license to discriminate against LGBTQ couples, ‘skim-milk marriage’ would have a devastating effect on our community’s ability to live freely and openly,” David added, quoting a now famous quip from the late Ruth Bader Ginsburg in 2013 during oral arguments against the Defense of Marriage Act.

Although the statement was signed by only two justices and a majority of five is needed to overturn marriage equality on the nine-member court, it raises questions about the confirmation of Barrett, whose nomination is still pending before the Senate Judiciary Committee after Trump picked her to replace progressive champion Ruth Bader Ginsburg.

If confirmed, Barrett — who’s known for having a conservative judicial philosophy —would take the place of a justice would was solidly in support of same-sex marriage, skewing the balance of the court further to the right.

David pointed out Barrett has said she openly holds the views of Antonin Scalia and Thomas and Alito “channel” the late justices with their statement.

“That fact, along with Barrett’s ties to anti-equality extremist groups who aim to criminalize LGBTQ relationships in the United States and abroad, shows that Barrett will only embolden these anti-equality extremist views on the Court,” David said, referring to Barrett admitting to having taken a fee to speak at a group associated with the anti-LGBTQ legal firm Alliance Defending Freedom.

James Esseks, director of the American Civil Liberties Union LGBT & HIV Project, said the statement from Thomas and Alito was “appalling” in the aftermath of same-sex couples having secured the right to marry and same-sex couples enjoying the right for five years.

Esseks continued Thomas’ statement puts into stark relief the possible consequences of the pending case before the Supreme Court of Fulton v. City of Philadelphia, which will decide whether a Catholic foster agency has a First Amendment right to reject same-sex parents and still obtain taxpayer funds through a government contract.

In the aftermath of Ginsburg’s death, legal observers have said the legality of religious-based refusals to LGBTQ people is the most vulnerable aspect of LGBTQ rights on the high court.

“That’s exactly what’s at stake in a case that will be argued on Nov. 4 — Fulton v. City of Philadelphia,” Esseks said. “We will fight against any attempts to open the door to legalized discrimination against LGBTQ people.”

The takeaway?  If you have "friends" who support Trump and the GOP's anti-LGBT agenda, you need to awake to the reality that such people are not your friends.  It is really that simple.

This was coming.
Now, the gays, next, reproductive rights.