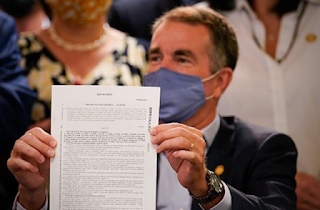 This blog has long maintained that far right Christians who seek to force their beliefs on all of society - the Christofascists, if you will - have never wanted equality under the law for themselves.  No, instead they want special rights that place them above the laws that bind the rest of us and they want a blank check to discriminate and mistreat anyone they choose.  With Virginia's enactment of comprehensive non-discrimination protections during the 2020 session of the General Assembly, these purveyors of hate are outraged that their ability to mistreat other citizens - often while gorging on taxpayer funds like pigs at a trough - are finally being properly curtailed.  Now, two lawsuits have been filed by the misnamed Alliance Defending Freedom, a certified hate group, challenging Virginia's new laws.  An article looks at the lawsuits and the disingenuous claims of the plaintiffs.  Here are highlights:

A wedding photographer and a group of several "Christian" - the parentheticals are mine]  institutions filed two different lawsuits against Virginia officials Monday over a new law that bans discrimination against the LGBT community.

The lawyers representing the plaintiffs argue that the law violates their First Amendment rights and forces them to “abandon and adjust their convictions or pay crippling fines.”

The law, titled the Virginia Values Act, went into effect on July 1 and prohibits discrimination on the basis of sexual orientation or gender identity in housing, public and private employment, public accommodations and access to credit. It was the first Southern state to adopt these types of protections for the LGBT community. Violations could be met with fines of up to $50,000.

In one lawsuit filed in U.S. District Court in Alexandria, Loudoun County wedding photographer Bob Updegrove argues that the law forces him to photograph same-sex weddings, even though he is opposed to same-sex marriage because of his faith.

Jonathan Scruggs, a lawyer with Alliance Defending Freedom, an anti-LGBT legal organization representing the plaintiffs in both cases, claims the new policy places the photographer in an impossible position between promoting “views against their faith” and violating the law.

“The government cannot demand that artists create content that violates their deepest convictions,” Scruggs said in a statement posted to the Alliance Defending Freedom’s website.

In a separate suit filed in Loudoun County Circuit Court, two churches, a religious school and a pregnancy center network claim the law will force them to hire employees who don’t share their beliefs about sexual orientation and gender identity.

The U.S. Supreme Court has previously ruled that no religious organization can be required to hire someone outside their faith and they must be allowed to dismiss or hire their leaders without government interference.

“Virginia’s new law forces these ministries to abandon and adjust their convictions or pay crippling fines,” Denise Harle, another Alliance Defending Freedom lawyer, said in a statement. “Such government hostility toward people of faith has no place in a free society.”

Charlotte Gomer, a spokesperson for Virginia Attorney General Mark Herring, said he was still reviewing the lawsuits and would respond in court.

“Attorney General Herring believes that every Virginian has the right to be safe and free from discrimination no matter what they look like, where they come from, or who they love,” she said in a statement. “LGBT Virginians are finally protected from housing and employment discrimination under Virginia law and Attorney General Herring looks forward to defending the Virginia Values Act in court against these attacks.”

Equality Virginia heavily advocated for the Virginia Values Act. In a statement, Executive Director Vee Lamneck pointed to the support the law garnered from a coalition of more than 140 religious leaders in 2019.

“Protecting LGBTQ Virginians from discrimination does not threaten [religious] freedom,” Lamneck said in their statement. “That’s why people of faith across the state advocated with us in support of the Virginia Values Act — because of their deep faith — not in spite of it.”

Posted by Michael-in-Norfolk at Wednesday, October 07, 2020