Some Republicans Say Party will Pay for "Stupid" Pandemic Approach 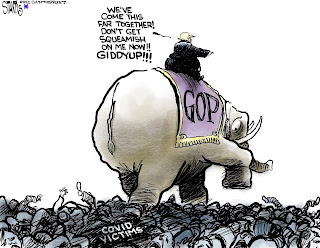 A piece in the Washington Post looks at the angst - perhaps terror is a better word - of some Republicans who fear that the GOP could suffer a much deserved punishment on election day next month.  My favorite and perhaps most accurate remark came from GOP operative Ed Rollins who said “There was a panic before this started, but now we’re sort of the stupid party”  That the GOP has become the "stupid party" did not happen overnight, but Trump has certainly intensified it as science and objective fact that do not fit the fantasy world narrative have been ignored and rejected be it on issues of climate change to the coronavirus pandemic. Adding to the problem has been the exodus of college educated whites from the GOP only to see them replaced by ignorance embracing evangelicals - a group that has long eschewed anything contradicting their myth based world - and uneducated whites. None of this regression of the GOP had to happen but for the conscious and generally cynical decision to court the ignorant and, worse yet, vote them onto city and county committees where they infected the party.  Here are article highlights:

There was the positive test result for a prominent conservative GOP senator, Mike Lee of Utah. Then another for Republican Sen. Thom Tillis of North Carolina. Then the same news from Trump’s campaign manager, the chairwoman of the Republican Party and his former White House counselor.

And then on Saturday, as the president remained hospitalized, came word of two more high-profile Republicans close to the president testing positive for the virus — Sen. Ron Johnson of Wisconsin and former New Jersey governor Chris Christie, who had helped Trump prepare for last week’s debate.

After months in which Trump and others in his party questioned the danger of the virus and refused to take precautions such as wearing masks, the Republican Party is now coming face to face with the scientific realities of the pandemic.

The drip-drip-drip of positive tests, coupled with the specter of a president who as of Saturday was “not on a clear path to a full recovery,” as White House Chief of Staff Mark Meadows put it, has prompted some Republicans to question whether the party is responsible for its own potential undoing.

And it has left them wondering how to wage a strong closing campaign when the judgment, actions and competence of its leaders were so squarely at issue just as voting is getting underway across the country.

“There was a panic before this started, but now we’re sort of the stupid party,” said Edward J. Rollins, co-chairman of the pro-Trump super PAC Great America. “Candidates are being forced to defend themselves every day on whether they agree with this or that, in terms of what the president did on the virus.”

“The president and the people around him flouted the rules,” said Republican strategist Michael Steel, who was an aide to former House Speaker John Boehner. . . . . voters dealing with the health and economic effects on them and their families won’t look on that kindly.”

Stuart Stevens, a veteran Republican adviser who works with the anti-Trump Lincoln Project, said “there is fatalism” among GOP officials and donors. “They wonder, ‘What can you do? How can you spin this?’ ”

Stevens said, “If I were running a Senate race, I’d run out and say the White House should have taken this more seriously.”

Trump’s hospitalization at Walter Reed National Military Medical Center, and a series of confusing statements from the White House about his condition, continued to send shudders of uncertainty through GOP ranks.

Even the event that only days ago was seen by many Republicans as a crowning achievement in an otherwise difficult year — installing Judge Amy Coney Barrett on the Supreme Court before Election Day — faced new hurdles amid senators’ virus diagnoses and revelations that multiple people may have become infected at her White House nomination ceremony.

Striking images of last weekend’s event, where influential Republicans and lawmakers mingled without masks, seemingly played on a loop on cable television, fueling critics who called the party reckless and enablers of superspreader events.

“Their extraordinary rejection of what scientists have been recommending is coming home to roost,” said Irwin E. Redlener, founding director of Columbia University’s National Center for Disaster Preparedness.

Republicans’ ability to escape being seen by moderate and independent voters as a party that has adopted a politics-first, science-second attitude could be difficult following months of cheering Trump’s handling of a pandemic that has killed more than 200,000 Americans.

As the administration’s coronavirus task force has pleaded with Americans to wear masks and socially distance, Trump has hosted rallies where face coverings have been scarce, encouraged the reopening of the nation’s economy and schools, claimed the virus will “just disappear,” and intentionally misled the public about its lethality because he did not want to “create a panic.”

Polling across the political map over the past week has further darkened the outlook as incumbents flail in traditional GOP enclaves, particularly in the South, where Democrats are energizing the Black community and White suburban voters amid significant changes in several states’ populations.

“You had the president’s family sitting in Cleveland, mask-less, and all of the others were wearing them. That sent a message to everyone watching: There is an incredible amount of arrogance around [Trump] the president. People can see it clearly.”

On Saturday, a group of top Republicans carried on campaigning in Iowa. For Gov. Kim Reynolds (R) and Trump political adviser Marc Lotter, among others, the road trip across the state was business as usual.

Lotter tweeted out photos from the tour, including a shot of Reynolds and Republicans without masks and high-fiving indoors. Posters with “Trump 2020” and “Trump: Keep America Great” were on the wall.