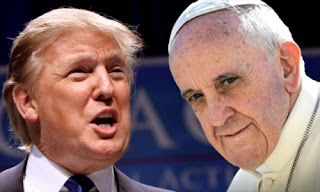 Many American Catholics don't listen to the Vatican or, if they do, it's more on a cafeteria style basis where one picks and choses what one wants to follow.  Nonetheless, it is timely that with less than a month before the 2020 elections Pope Francis has issued a statement reminding American Catholics of what they should support and what they should reject.  Donald Trump's name is not mentioned nor is the Republican Party specifically mentioned, but Francis takes aim at everything Trump and today's toxic GOP stand for, including racism, white nationalism and anti-immigrant hatred.  A piece in the Washington Post looks at Francis' timely reminder of what Christ's message calls one to reject.  Here are excerpts:

We have become accustomed to interventions in U.S. political campaigns from religious leaders — including Catholic bishops and White evangelical preachers — who wholeheartedly recommend support for conservative political figures who oppose abortion and same-sex marriage.

We are not accustomed to a hearing from a pope, a month before Election Day, who criticizes “myopic, extremist, resentful and aggressive nationalism,” and castigates those who, through their actions, cast immigrants as “less worthy, less important, less human.”

Nor is it in our political playbook that a pope would call out an “every man for himself” worldview that “will rapidly degenerate into a free-for-all that would prove worse than any pandemic.”

Or say this: “The marketplace, by itself, cannot resolve every problem, however much we are asked to believe this dogma of neoliberal faith. Whatever the challenge, this impoverished and repetitive school of thought always offers the same recipes … the magic theories of ‘spillover’ or ‘trickle’ — without using the name.”

These are all Pope Francis’s words from his encyclical letter released Sunday, “Fratelli Tutti.”

[I]it will be hard for Americans, Catholic and otherwise, to read Francis outside the context of a presidential campaign in its decisive phase. The themes of his encyclical — a form of papal communication more formally authoritative than a sermon or a speech — will make it much harder for conservative and right-wing Catholics to insist that the only orthodox vote is for Trump.

Francis’s emphasis throughout was on denunciations of “empty individualism,” a “narrow and violent nationalism, xenophobia and contempt, and even the mistreatment of those who are different,” and “a cool, comfortable and globalized indifference.”

As has been customary for him, the pope reiterated the church’s teaching against abortion — a word that does not appear directly in the document — but did so while discussing other social problems. For example, he cited his earlier condemnations of “a ‘throwaway’ world” that lacks respect for the “poor and disabled, ‘not yet useful’ — like the unborn — or ‘no longer needed’ — like the elderly.”

The document read as if Francis had been an attentive viewer of Tuesday’s nasty, chaotic and petty debate. Again, it was hard not to think of the president as Francis described “a strategy of ridicule, suspicion and relentless criticism.”

“Political life no longer has to do with healthy debates about long-term plans to improve people’s lives and to advance the common good, but only with slick marketing techniques primarily aimed at discrediting others,” he wrote. “In this craven exchange of charges and counter-charges, debate degenerates into a permanent state of disagreement and confrontation.”

Many Americans will no doubt resist seeing Francis’s political observations as infallible. But as a reminder of how far our politics have swung away from promoting the common good, this document is indispensable.