In Politics, Some Gays Are Their Own Worse Enemy 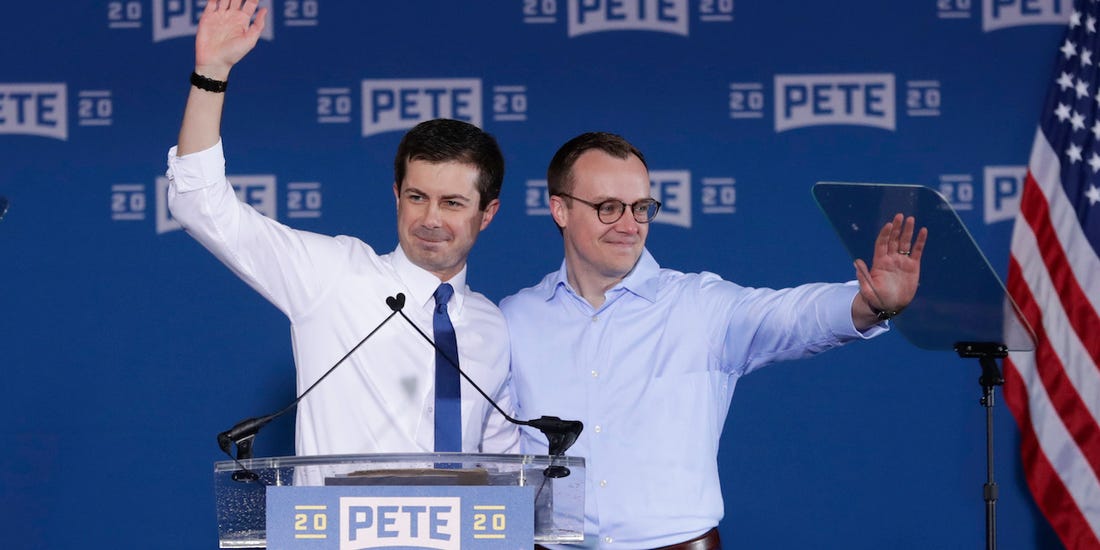 I grew up in a politically involved family where politics were discussed at the dinner table and sometimes quite vocally at family reunions and other extended family gatherings. Despite sometimes strenuous disagreements (one might think a fight was ensuing at times), my relatives fortunately stayed focus on the bigger picture and did not believe in circular firing squads in politics.  The same cannot be said for many in the LGBT community. Most idiotic, of course are the gay Republicans who increasingly suffer from a blindness that a 1930's German Jew would have had if they had joined and actively supported the Nazi Party. Only a fool - or someone with significant self-loathing - supports a party that opposes ones rights and embraces extreme elements that say gays are "worthy of death" as one Christofascists recently said about Pete Buttigieg.

Next in line for the idiocy award are those in the LGBT community who oppose Pete Buttigieg because he is not "gay enough."  It's not his policy proposals that are the problem. No, Buttigieg's big sin is that he, like myself and so many others I know, stayed in the closet for years and blended in with the straight world rather than being flamboyant and marching in a pride parade in only a speedo.  Meanwhile, through his presidential campaign, Buttigieg is engaging in an amazing level of default gay rights activism and is changing many minds along the way.  A piece in the New Yorker looks at the idiocy, resentment and perhaps hidden jealousy - in my view - of those in the LGBT community who seemingly think they have the exclusive right to be the arbiters of and to define what it is to be gay.

What most disturbs me is that what one might call the radical gays continue to miss the reality that without the rest of us gays - the ones who live in straight residential neighborhoods, have joined once exclusively straight social institutions and to an extent blended, if you will - have been a major reason gays rights have progressed so much over the last two decades.  They also forget that when one doesn't live in San Francisco, Chicago, New York or other ultra-liberal cities, being a radical revolutionary can be downright dangerous. Here are article excerpts that try to make excuses for those who once again prove to see themselves as superior and in the process are their own worse enemies, show that they cannot see the forest for the trees, and make the rest of us gays look ridiculous:

By now, you may have heard that some queer people think that Pete Buttigieg, the former mayor of South Bend, Indiana, and a current contender for the Democratic Presidential nomination, is not gay enough. Unless you are immersed in this conversation with other queer people, you may have thought, “That’s ridiculous.”

The notion that some of us think Buttigieg is not gay enough has an identifiable relationship to the facts, which are that, for the purposes of this discussion, people who grew up queer in this country fall into two distinct categories of experience. One is the experience of never fitting in, being bullied by classmates for the way you walk, the way you look in clothes, the way you hit or fail to hit—all the things that set you apart before you have language to describe them. . . . . Millions of people have had a version of that experience.

And then there is the other experience, the life of blending in, only to surprise your classmates—or, more likely, former classmates who follow you on social media—with the revelation that you are gay. I am not arguing that one category of experience is worse or more difficult or painful than the other. [But, of course, she is doing so]. There are people who revel in their specialness from an early age, and there are people who fit in but feel tormented by their deep secret. I am saying only that these two kinds of experience are very different. . . . . Recently, a friend mentioned that, after thirty years of teaching, she had mentioned her wife in class for the first time, surprising her students with the revelation that she was gay—and I found myself momentarily marvelling at having the option to come out to one’s students or not.

As part of his campaign, and in developing his political persona, Buttigieg has repeatedly told a compelling story about his coming out. His is the story of someone who blended in and was therefore able—or, one might say, forced—to choose the circumstances and timing of his coming out. He chose to wait a long time: until after he graduated from college, after he had served in the military, after he had been elected mayor. He has made it clear that he feared that, if he had come out sooner, his political career might have suffered.

He also waited until after attitudes toward homosexuality had changed and same-sex marriage had become legal in more than half the states and was recognized by the federal government—all thanks to the courage and work of people who came out before Buttigieg did. Then, in 2015, he had the chutzpah to write an op-ed titled “Why Coming Out Matters,” in which he praised himself for “putting something this personal on the pages of a newspaper.” Many a reader might have wondered, as I did when my friend mentioned her relationship with her students, what it must be like to have the option of not being exposed.

Again, I am not saying that L.G.B.T. people who don’t pass are somehow morally superior to L.G.B.T. people who do [But, of course, she is doing so]. But these two distinct experiences are in some ways correlated with two divergent tracks in L.G.B.T. politics. One kind of queer politics is rooted in ideas of liberation, revolutionary change, and solidarity. . . . . The strategy of this brand of politics is to work across differences to bring about change.

The other, more mainstream, and often more visible kind of L.G.B.T. politics aims to erase difference. Its message to straight people is “We are just like you, and all we want is the right to have what you have: marriage, children, a house with a picket fence, and the right to serve in the military.” The vision of this politics is a society in all respects indistinguishable from the one in which we live now, except queer people have successfully and permanently blended in. To be sure, all kinds of queer people have been involved in both kinds of queer politics. But the politics of being “just like you” leaves out the people who cannot or do not want to be just like conventional straight people, whether in appearance or in the way we construct our lives and families.

Buttigieg embodies the second kind of gay experience and the second kind of gay politics. In a beautiful essay published in the Los Angeles Review of Books, Greta LaFleur, a professor of American studies at Yale, analyzed a photograph of Buttigieg and his husband, Chasten, that appeared on the cover of Time magazine in May of last year. “This photo is about a lot of things,” LaFleur wrote. “But one of its defining features is its heterosexuality. It’s offering us the promise that our first gay first family might actually be a straight one.

Buttigieg is the ultimate candidate of the country’s post-2016 trauma. He is not a woman. He is not a socialist. He is decidedly not a revolutionary. He does not make big, sweeping promises, except one: that nothing much will change, only Donald Trump won’t be President. “What I like about Mayor Pete is that he is not a strong ideologue,” Tod Sedgwick, a [straight] volunteer who had gone to New Hampshire to canvass for Buttigieg, told me.

What makes Buttigieg an easy and reassuring choice for these older, white, straight people, and a disturbing possibility for the queer people who seem to be criticizing him for not being gay enough? It is that he is profoundly, essentially conservative. He is an old politician in a young man’s body, a straight politician in a gay man’s body.

In truth, Buttigieg is proposing big changes should he be elected and just by his success to date  in the primary contest has raised gay acceptance to a level most of us would not have believed possible not many years ago.  As for the gays who attack Buttigieg, whether they know it or not, they are attacking the rest of us gays who according to the radicals suffer from the cardinal sin of having blended and wanted some of the same rights as the straight community enjoys. Sadly, they are blind to the reality that they need us more than we need them.

Posted by Michael-in-Norfolk at Sunday, February 16, 2020

I married a woman and divorced at the age of 35, with two kids. I came out and became active in marching, funding organizations like Lambda, and political activism. I came out in my business decades before it was "done," and ultimately married a man who I have now been with for 30 years. My experience is no better or worse than that of my husband's, who is a somewhat effeminate man with a slight lisp, who suffered from never being able to blend in. We each suffered because we were gay, albeit in different ways.

Buttigieg, who is not my preferred candidate at the moment, has lived his life in a thoroughly decent way. He has never disparaged the flaming queens among us. His article about coming out details HIS journey, which he is entitled to. Gays that feel the need to elevate their own experience over that of others are as blind as the heterosexuals who expect us all to adhere to their concept of normality. They need to get over themselves.

Thank you for your comment. You made my point most eloquently. Each of us HIS/HER story and journey and no one should be able to take that from us or denigrate us because our journey was different from theirs.