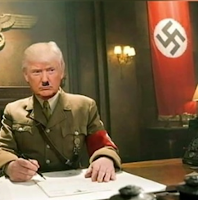 I believe Donald Trump is an existential  threat to American democracy.  Sadly, today's Republicans' only concern is staying in office and avoiding the wrath of Trump and his hideous base of support , so behavior that would never have been tolerated even five years ago is shrugged off leaving the nation to slide towards fascism.  Yes, I will vote for any Democrat in November running against Trump in the hope that he will be defeated and forced from office - assuming he will leave voluntarily if he loses the election. Frighteningly, many Americans seem indifferent to what is happening and are all too reminiscent of Germany's citizenry as Hitler rose to power.  A piece in Salon from this past Saturday looks at Trump's conduct last week and why Americans must act to stop him before it is too late.  Here are article highlights:

There will come a time when we look back on this week as the moment in our history when we finally understood that we have a man as president who is acting like a fascist dictator. Just look at the headlines from one day's New York Times alone: "Alarm in Capital as Axes Swing in Growing Post-Acquittal Purge," "Justice Dept. Acts to Ease Sentence for a Trump Ally." If either one of those headlines had run on the front page of a major American newspaper before now, not to mention both of them at once, we would have believed as a people, as a citizenry, that we were facing a national crisis. But this week? Wednesday was just another day in Donald Trump's America.

The day before that, in what became known as the "Tuesday night massacre," all four prosecutors in the case against Trump's longtime friend and political bad boy Roger Stone had resigned in protest of the intervention by Trump and his attorney general, William Barr, to reduce the sentence recommended by the Department of Justice in Stone's conviction for lying to congressional committees and tampering with witnesses.

All of this followed closely the "Friday night massacre" of last week, when Trump fired two of the impeachment witnesses against him, Lt. Col. Alexander Vindman of the National Security Council and Gordon Sondland, ambassador to the European Union.

But two "massacres" in a row was just the beginning. By mid-week, Trump was suggesting that Army officials with court-martial authority over Vindman should "take a look at" punishing him for testifying at the impeachment hearing. On Thursday, the New York Times front page trumpeted, "U,S. Lawyers Fear Removal of a Guardrail: Stone Case Stirs Worry of What's to Come."

Folks, let's not mince words: This is the kind of stuff we read about happening in dictatorships like Russia and North Korea and Iran. And yes, it's the kind of rule by strong-arm fiat that was  practiced by Adolf Hitler in Nazi Germany.  Before this week, I would have thought it an exaggeration to compare Trump's frequent rallies to the infamous Nuremberg rallies Hitler held during the1930s. No longer. Trump's rallies are unnervingly close to those held in Nuremberg. The MAGA hat has become a kind of Trumpian Nazi  helmet. The denunciations of hated minorities are the same. As is his insane bellowing before a crowd screaming its slavish obeisance.  To call for the imprisonment of political opponents without trial is not playing with rhetoric for effect. It's not political gimmickry. It's not cute. It's not funny. It's not clever. Let's say out loud what it is: It's pure fascism, plain and simple.  The man who stands before those rallies and encourages such idolatry isn't merely running for president. He is calling, directly and without apology, for the kind of obedience and loyalty demanded by dictators. He is commanding worship and submission. It must be why he attracts so completely the support of evangelical Christians. He truly is the false idol their Bible warned them against. They have fallen for him in the same way the most conspicuously devout worshipers commit sins. The inevitability of Trump and his evangelical masses is jaw-dropping, and yes, biblical.  It's hard to put a finger on the worst thing Trump has done since taking office, but right up there is the complete destruction of the idea that the person in the Oval Office is the president of all the people. He isn't. He doesn't want to be. If you didn't vote for him, if you're not out there wearing a MAGA hat and screaming at his rallies, you're a non-person. If your state didn't go for him in the 2016 election, forget about it. Just ask California, or Puerto Rico, still waiting for federal assistance after natural disasters. Or ask New York, which Trump is now extorting like a domestic Ukraine, by denying New Yorkers access to the "Trusted Traveler" program unless the state "stop all of its unnecessary lawsuits & harrassment" [sic].

To divide the country into those Trump approves of and those he does not is inherently fascistic. That way lies the singling out of non-supporters and minorities for special treatment.

Donald Trump is an existential threat to the virtues of the democracy we have enjoyed for more than two centuries. He is a real threat to the things we have thought we shared as Americans: the love of variety and dissent, and a belief in the consent of the governed. The capacity of all citizens to respect each other's opposing positions, even amid vigorous disagreement. A respect for the disadvantaged and a scorn for the absolutism of the strong. A universal contempt for the public lie. Trump stands in outright opposition to all of this, and he is a threat to us all. It's time for another Moratorium [Moratorium to End the War in Vietnam] march, this time against Donald Trump. It's not enough to vote against him in November. We're sliding into a fascist dictatorship. The time to act is now.

Posted by Michael-in-Norfolk at Wednesday, February 19, 2020

Your heading is the understatement of the decade.
IMPOTUS has always thought he had all the power. He thought Obama had it and coveted it. Now that he's got it, he's just acting like the privileged, spoiled, corrupt brat that he's always been. No surprises.