Bloomberg's First Debate is a Bust 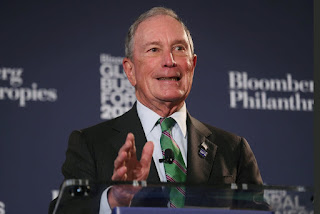 Michael Bloomberg joined the Democrat debate stage for the first time last evening and it was not pretty.  Bloomberg has held himself out as the savior of the Democrats and the best person to defeat Donald Trump in November, yet his rivals were unmerciful in their attacks and Bloomberg confirmed what I had heard one commentator say: debates are not his strong suit. Who actually won the debate may be in the eye of the beholder since all took incoming fire from the rival candidates, but Bloomberg seemingly was the big loser. It is essential that Donald Trump be defeated in November, but I remain uncertain who is the best Democrat - which rules out Sanders who isn't really a Democrat and never has been - to take on Trump. A column in the New York Times looks at Bloomberg's trashing last evening.  Here are excerpts:

You can buy ads and saturate the airwaves with them. You can buy allies, especially with the right budget.

But you can’t buy a debate performance, and that’s why Mike Bloomberg’s on Wednesday night mattered so much. This was the man talking, not the money.

And the man needed rescue — from his bloodthirsty rivals and even more so from himself.

Making his first appearance alongside other contenders for the Democratic presidential nomination, Bloomberg knew that he would be under furious attack and had clearly resolved not to show any negative emotion. But that meant that he often showed no emotion at all. Or he looked vaguely bemused, and that didn’t communicate the coolness that he intended. It signaled an aloofness that he very much needed to avoid.

He repeatedly — and laughably — suggested that he wouldn’t tear up nondisclosure agreements with women who have sued him or his company because they wanted the silence as much as he did. Elizabeth Warren hammered and hammered him on this point, but he wouldn’t budge, and that left the impression that he couldn’t budge. The truth would be too ugly.

Ugly: That’s the word for this ninth debate of the Democratic primary season. It had the fewest candidates — six — but the most nastiness, because those candidates clearly felt an urgency to diminish their competitors and elevate themselves before it was too late. A meager haul of votes in the Nevada caucuses this coming Saturday could effectively undo one or more of them; a poor showing on Super Tuesday less than two weeks from now would definitely be the end of the road.

So Pete Buttigieg went after Amy Klobuchar. Bernie Sanders went after Buttigieg. Joe Biden went after Sanders. Elizabeth Warren went after everybody, a Sherman tank bent on flattening everything in her path. And all of them went after Bloomberg. Dear God, how they went after Bloomberg. I’ve seen chum treated with more delicacy by great white sharks. It was the first time since Bloomberg announced his run for the presidency that he was within reach. For three high-spending, high-flying months, he campaigned essentially as a phantasm, ubiquitous in television commercials but averse to interviews, a supposed paragon of electability who had yet to put himself before voters, more idea than actuality, able to be seen but not touched.

But on Wednesday night, that changed abruptly. The apparition became flesh. And it was bruised from the get-go and bloodied soon after.

Is he trying to purchase it? Absolutely. But, as he said at the debate, there’s a great cause behind that expenditure — his determination to deny Donald Trump a second term — and his funding of his own presidential bid at least means he’s beholden to no one.

That line was obviously scripted but no less fascinating for it, because it affirmed the nutty extent to which Bloomberg, by dint of financial swagger and aggressive public relations, has created the narrative that he is the leading moderate alternative to Sanders and the most fearsome adversary for Trump. There’s no real proof yet of either. But it’s a notion with enough currency that Buttigieg, who actually leads the Democratic contest so far in terms of accrued delegates, felt the need to chip away at it.

Maybe Bloomberg never stood a chance, not given how prepared his rivals were to tear him apart and the particular exuberance and eloquence that Warren brought to the task. She savaged him not only for his mistakes but for his explanations of those mistakes, so that his apologies were all but erased.

You thought there was acrimony between Warren and Sanders? They’re honeymooning sweethearts compared to her and Bloomberg.

Sanders was the big winner of the night, because he entered the debate as the front-runner but evaded the kind of harsh treatment that a front-runner usually gets. Bloomberg got it instead.

So while Bloomberg warned direly that Sanders would be a disastrous nominee and possibly guarantee Trump’s victory, Bloomberg’s presence onstage may have bettered Sanders’s odds of getting to the general election. It certainly didn’t better Bloomberg’s.

There was another winner: Trump. The candidates flexed so much disdain for one another that they had a limited reserve for him, and I can imagine Trump and his advisers scouring the night’s transcripts for tips on how to take down whoever the eventual Democratic nominee is.

I don’t know how Democrats escape the uncomely chaos of their contest. But I do know that it’s not the ideal run-up to November, and Bloomberg’s billions aren’t magically going to make it all better.

Posted by Michael-in-Norfolk at Thursday, February 20, 2020