Russia's Ongoing Effort to Sow Racial Discord — and Violence — in the U.S. 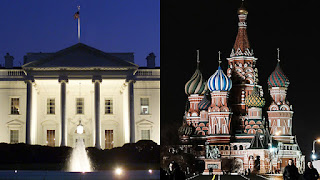 If one wonders where Donald Trump and many on the far right - e.g., those who sabotaged Virginia Democrats in early February using race - who are fanning racial division in America got their agenda from, look no farther than Vladimir Putin's Russia. NBC News reports on newly reviewed documents connected to some of the Russian operatives indicted by Robert Mueller that indicate fanning racial discord - and even violence - was part of the 2016 Russian game plan to elect Trump and that the agenda , in fact continues and could be a problem in 2020.  In addition to causing division and racial hatred, a goal is to suppress the black vote and thereby help Republicans, namely Trump.  It's something blacks mentioned in a prior post ought to be conscious of as they wring their hands over Pete Buttigieg's "whiteness" (his gayness will likely also be targeted by the ever conniving Russian operatives who likely recognize the ease with which black pastors can be played).  Here are article highlights that ought to make thinking individuals of all races think twice before falling for Russia originated efforts at division and discord:

LONDON — Russians who were linked to interference in the 2016 U.S. election discussed ambitious plans to stoke unrest and even violence inside the U.S. as recently as 2018, according to documents reviewed by NBC News.

The documents — communications between associates of Yevgeny Prigozhin, a Kremlin-linked oligarch indicted by special counsel Robert Mueller for previous influence operations against the U.S. — laid out a new plot to manipulate and radicalize African-Americans. The plans show that Prigozhin’s circle has sought to exploit racial tensions well beyond Russia’s social media and misinformation efforts tied to the 2016 election.

The documents were obtained through the Dossier Center, a London-based investigative project funded by Russian opposition figure Mikhail Khodorkovsky. NBC News has not independently verified the materials, but forensic analysis by the Dossier Center appeared to substantiate the communications.

One document said that President Donald Trump’s election had “deepened conflicts in American society” and suggested that, if successful, the influence project would “undermine the country’s territorial integrity and military and economic potential.”

The revelations come as U.S. intelligence agencies have warned of probable Russian meddling in the 2020 election.

The documents contained proposals for several ways to further exacerbate racial discord in the future, including a suggestion to recruit African-Americans and transport them to camps in Africa “for combat prep and training in sabotage.” Those recruits would then be sent back to America to foment violence . . . There is no indication that the plan — which is light on details — was ever put into action, but it offers a fresh example of the mindset around Russian efforts to sow discord in the U.S.

The blueprint, entitled “Development Strategy of a Pan-African State on U.S. Territory,” floated the idea of enlisting poor, formerly incarcerated African-Americans “who have experience in organized crime groups” as well as members of “radical black movements for participation in civil disobedience actions.”

The goal was to “destabilize the internal situation in the U.S.”

Frank Figliuzzi, a former assistant director of counterintelligence at the FBI and an NBC News contributor, who reviewed the documents, said that they offer a warning to the U.S. . . . “The unfortunate reality is that we’re seeing an adversary that will consider virtually anything to get what it wants, and if it means violence or splitting America along racial lines or eroding our trust in institutions, they’ll do it.”

Some of the documents appear to have been sent by Dzheykhun “Jay” Aslanov, an employee of the Internet Research Agency, the St. Petersburg-based troll farm that played a key role in the 2016 Russian meddling campaign. Aslanov was one of 13 Russians indicted by Mueller in February 2018 for his role with the IRA.

The plan was shared with Mikhail Potepkin, a Russian businessman, who then circulated it more widely, according to communications reviewed by NBC News.

Both Aslanov and Potepkin have been linked to Prigozhin, a Russian catering magnate often described as “Putin’s chef.” Prigozhin was also indicted by Mueller for funding the IRA. Widely perceived as a Kremlin operative, he has been connected to a shadowy mercenary outfit known as the Wagner Group, whose guns-for-hire are reported to have been involved in Russian military operations in Syria and Eastern Ukraine, according to U.S. military officials.

The Mueller report exposed how Russian trolls, employed by associates of Prigozhin, deliberately inflamed racial tensions by spreading false and incendiary stories to African-Americans via social media. Among the objectives was to suppress black turnout in the 2016 U.S. election.

“Russia understands how critical the African American vote is to determining the outcome of elections,” said Demings, who sits on the House Intelligence Committee. “And because we have not effectively dealt with racism as a country ourselves, I believe we've made ourselves vulnerable to foreign powers like Russia to continue to try to undermine.”

The documents also discuss how to expand Russia’s clout on the African continent and win business there, from arms sales to mining contracts. They outline propaganda efforts to target Africans and stir up negative opinions about Europe and the U.S.

“Even though these kinds of initiatives from the Russians aren’t new to us, what is new is the rapidity with which they can get this message out on social media and saturate the American consumer with these kinds of thoughts,” said Figliuzzi, the former FBI official. “That puts the Russian initiative on steroids and should scare all of us.”