Trump is a Threat to Religious Liberty 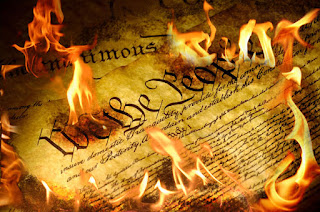 Donald Trump is many things, but a defender of the U.S. Constitution, including the First Amendment protecting freedom of religion, he is not.  Indeed, he is a threat to constitutional government and the religious freedom of except strident, far right Christian extremists who seek to totally subvert the concept as laid down by the Founding Fathers. Indeed, they want a de facto established religion that only upholds their own toxic and perverted version of Christianity.  Playing on the self-centered hypocrisy of the Christofascists and "Christian leaders" like Jerry Falwell, Jr., Pat Robertson and a host of similar scam artists, Trump has set about depriving others of their religious freedom and, hopefully in time, a major backlash against right wing Christians where their nonsensical claims of persecution might become a reality as they find themselves being treated as they have treated others for so much of history. A piece in New York Magazine looks at Trump and the Christofascists destruction of true religious freedom.  Here are highlights:

A central pillar of Donald Trump’s compact with conservative Christians, which has been immensely useful for him and is critical to his reelection prospects, is his much-professed concern for “religious liberty.” There’s a whole fact sheet about the topic on the White House website. It was the alleged subject of a major executive order early in his presidency.

But as Steven Waldman (founder of Beliefnet, a web portal for all things religious) observes in Sacred Liberty, his recently published comprehensive history of America’s tradition of religious freedom, Trump’s actual record is not so positive:

Donald Trump’s legacy on this issue can seem confusing. He talks about defending religious freedom more than almost any other president. His administration has taken a few positive steps, such as deciding that the Federal Emergency Management Agency could give disaster relief to houses of worship and raising concerns about persecution of Christians overseas. . . . But much of his religious liberty agenda involves efforts, focused largely on helping conservative Christians, that are minor, symbolic, or actually damaging.

Most obvious, Trump is the first president since the virulently anti-Mormon Rutherford B. Hayes to publicly single out a religious community for opprobrium and (attempted) discrimination. . . . . he has violated most of the principles that have sustained religious freedom by favoring one religion over another; ignoring First Amendment protections; blurring the distinctions between Americans practicing their faith and extremists overseas; and proposing that practitioners of one faith should have second-class citizenship. He has made the concept of religious freedom partisan instead of universal, a way to divide rather than unite.

Trump is a friend to religion only if your religion happens to be the same as that of his conservative Evangelical and traditionalist Catholic allies, who have a mutually exploitative and very transactional relationship with the 45th president.

[M]uch of Trump’s talk about religious liberty involves reinforcing the fatuous paranoia of some conservative Christians who believe state neutrality toward their faith, as well as the spread of nonbelief or religious heterodoxy, actually represents persecution.

The many thousands of Christian martyrs over the centuries (and those still suffering in other countries) must be laughing or crying at the idea that being disrespected by retailers and seasonal-card senders is some sort of crucifixion. But it reflects Trump’s close identification with the Christian right’s claim that the liberty to practice one’s faith “in the public square” is so absolute that it excludes counter-concerns ranging from simple courtesy (the main problem with shouting “Merry Christmas” at non-Christians) to anti-discrimination laws. Again, Waldman explains how efforts to accommodate religious practice have degenerated into demands for plenary exemptions from norms the rest of society observes, to the point at which conservative Christians began to distort and politicize their own faith traditions . . . .

Millions of Americans (most notably Catholics, but many Evangelicals, too) go to church regularly without for a moment sharing the hostility to homosexuality (or, for that matter, legalized abortion) that their leaders increasingly treat as fundamental to their beliefs. Such distortion of an ancient faith is a lot more dangerous than any threats to the tender conscience of the occasional aggrieved baker.

Not that long ago, conservative Evangelicals typically regarded church-state separation as the central principle of religious liberty. Most Christian-right leaders have abandoned or even inverted that position. When Thomas Jefferson referred to religious liberty as requiring a “wall of separation” between church and state (a precedent today’s Christian-right leaders either ignore or attack in making the case that the Founders wanted a Christian nation), he was siding with Connecticut Baptists fighting a government that was hostile to minority religious communities. Similarly, James Madison’s commitment to total state neutrality on matters of religion was informed by his relationships with Virginia Evangelicals. . . . All that has changed radically.

In this transformation of conservative Christianity’s political arm from the self-confident advocacy of pluralism in matters of faith to a narrow, sex-obsessed movement fighting to bring back the imagined paradise of the 1950s, Trump was perhaps an inevitable figure. If ever there were a complete product of the most de-Christianized traits of secular culture, it’s Donald Trump. Yet he offers his religious supporters unconditional backing in their wars against abortion, LGBTQ rights, secular public education, and, yes, believers in what they consider false gods.

In 20th-century Europe, authoritarian movements exploited conservative Christians eager to fight socialism and secularism and regain their old power over cultural life. These politicized believers were ultimately corrupted and betrayed. Trump may serve the short-term purposes of those who have convinced themselves he is a modern-day Cyrus the Great, a “nonbeliever appointed by God as a vessel for the purposes of the faithful.” But he is no friend of liberty and, in the longer view, represents a threat to America’s great tradition of religious pluralism.