The Far Right's Effort to Eliminate the Establishment Clause 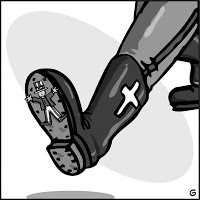 In addition to guaranteeing freedom of religion, the First Amendment of the U.S. Constitution states: says “Congress shall make no law respecting an establishment of religion.”  It's a provision increasingly ignored by the far right and the political whores in the Republican Party who seemingly have no limits on how far they will go in seeking to force far right Christian dogma on the entire nation and all of its citizens.  Between red state anti-abortion laws and the Trump/Pence regime's new "conscience rule" that exempts right wing Christians from the state and federal non-discrimination laws, America has a de facto established religion.  Worse yet, due to the tax-exempt status granted to churches and the plethora of  "ministries" so loved by Christofascists, all of us are underwriting this de facto established religion.  All of this would shock the Founding Fathers who knew well the evil of an established church.  A column in the New York Times looks at the phenomenon which violates the U.S. Constitution and puts the religious freedom of everyone else at risk.  Here are highlights:

It’s almost exactly a year since Irish voters, by an overwhelming two-thirds majority, threw off the shackles of the Roman Catholic Church and repealed the country’s constitutional provision banning abortion. On Friday, voters are expected to defy the bishops again and repeal the provision that requires at least four years of living apart before a couple can apply for a divorce. (Ireland legalized same-sex marriage by popular vote back in 2015.)

Back in Alabama, the state’s governor, Kay Ivey, issued this official statement when she signed the abortion ban into law: “To the bill’s many supporters, this legislation stands as a powerful testament to Alabamians’ deeply held belief that every life is precious and that every life is a sacred gift from God.”

I lack the social science expertise to explain the opposite trajectories of our two countries: Ireland marching proudly into the future, while the United States is reconfiguring itself into a theocracy that would have appalled our Founding Fathers. (Abortion, by the way, was legal at the nation’s founding, and for much of a century afterward.)

But I do know something about the United States Constitution. If the First Amendment’s Establishment Clause means anything, it has to mean that God’s will cannot be a constitutional justification for a law that erases an individual right.

[I]t’s past time for the rest of us to step back and consider the impact of religion’s current grip on public policy — not only on the right to abortion, but on the availability of insurance coverage for contraception in employer-sponsored health plans and on the right of gay and transgender individuals to obtain medical services without encountering discrimination.

The Establishment Clause says “Congress shall make no law respecting an establishment of religion.” But we don’t hear much about it these days. It has shrunk noticeably at the hands of the current Supreme Court, in contrast to the First Amendment’s other religion clause, the Free Exercise clause, much in favor with today’s majority.

The only Supreme Court justice who ever linked abortion and the Establishment Clause was John Paul Stevens, now nine years into retirement and, at age 99, author of a new memoir.

Thirty years ago, in a case called Webster v. Reproductive Health Services, the court considered a Missouri law that placed several restrictions on access to abortion. The law contained a preamble declaring it to be a “finding” of the state legislature that “the life of each human being begins at conception.”

Justice Stevens, alone, disagreed. The preamble was “an unequivocal endorsement of a religious tenet of some but by no means all Christian faiths,” he wrote in his separate opinion. It “serves no identifiable secular purpose,” he continued, adding, “That fact alone compels a conclusion that the statute violates the Establishment Clause.”

Stevens explained: “Bolstering my conclusion that the preamble violates the First Amendment is the fact that the intensely divisive character of much of the national debate over the abortion issue reflects the deeply held religious convictions of many participants in the debate.” He concluded, “the Missouri legislature may not inject its endorsement of a particular religious tradition into this debate.”

The court will face another Establishment Clause test, which it will predictably fail, in a year or so when it confronts the Trump administration’s Religious Exemption Rule. This rule grants employers who have religious objections to birth control an opt-out from the Affordable Care Act’s mandate to cover contraception in the employee health plan. The rule represents a metastasis from the Supreme Court’s Hobby Lobby decision in 2014, . . . the Trump rule offers no such workaround. Women with the misfortune to work for anti-contraception employers will become second-class citizens, their statutory right to full health care benefits sacrificed to protect the boss from complicity in the sin of birth control.

In the United States Court of Appeals for the Third Circuit, 14 leading scholars of the Constitution’s religion clauses have filed a brief arguing that the rule manifests unconstitutional “religious favoritism,” an “unyielding preference for religious interests over any conceivable secular interest,” while shifting “serious burdens to third parties.”

This month, the administration issued an expanded “conscience rule” to permit health care workers, down to the level of receptionist, to opt out of involvement with procedures to which they have moral or religious objections. Another new rule to be issued shortly would limit protections for transgender patients seeking even ordinary health care by expanding opt-outs for providers who have religious objections to treating them. These new measures, carrying out [Trump's] the president’s pledge to serve the interests of his allies on the religious right, will undoubtedly be the subject of lawsuits.

[B]efore the end of the current term, we will have a better idea of whether there’s anything left of the Establishment Clause when the court decides the pending case on the constitutionality of a 40-foot cross on public land in Maryland. Lurking in the background of this case is the argument that the Establishment Clause permits any religious favoritism short of actual coercion of non-adherents. You don’t like the public display of sectarian symbols? No problem — no one’s making you look at them.

It took Ireland many years and much pain to claim the secular freedom its people now enjoy. It’s taking us just a few years of disingenuous politics to hurl us backward to a place many of us never imagined.

Be very afraid.  The far right, especially the Christofascists represent a clear and present danger to constitutional government.
Posted by Michael-in-Norfolk at Thursday, May 23, 2019