Trump Is Driving Out Republican Voters 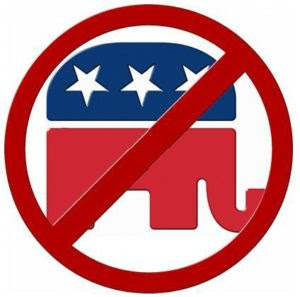 A piece in the New York Times looks at an issue that I have long argued ought to be terrifying the Republican Party both nationally and here in Virginia: the GOP is driving away younger, non-rural voters at an alarming rate and putting the party's long term viability at risk. The GOP base is aging and literally dying off and in states like Virginia, the rural vote can no longer outweigh the collective vote of the urban voters, which is precisely why GOP operatives sought to create chaos in the Virginia Democrat Party with its orchestrated attacks on Ralph Northam, Justin Fairfax and, to a lesser extent Mark Herring (a piece in the Washington Post suggests the GOP strategy is not working with the Democrat donor class).  The majority of voters increasingly do not want what the GOP is selling.  And Donald Trump is exacerbating the problem, especially with younger voters who over time will replace the GOP's steadily dying base.  Personally, the death of the GOP and everything it has come to stand for cannot come soon enough, but one would think alarm bells would be going off somewhere with the GOP leadership.  Here are article highlights:

Ever since Donald Trump’s upset victory over Hillary Clinton in 2016, much of the media attention has been on how Democrats need to reconsider their strategy for winning voters in future elections, particularly Obama-to-Trump voters. But the results of the 2018 midterm elections suggest that Republicans have some soul-searching to do as well.

They lost the popular vote in six of the last seven presidential elections and suffered battering losses in the House in 2018. Republican strategists must grapple with how to keep their party viable nationally, and our data suggests that Trumpism may continue to hurt them in the future.

It has flown under the radar a bit, masked perhaps by the switch of millions of Barack Obama’s voters into Mr. Trump’s column, but in 2016 Mr. Trump did not receive support from a large segment of voters who pulled the lever for Mitt Romney in 2012. In fact, our data shows that 5 percent of Romney 2012 voters stayed home in 2016, while another 5 percent voted for Mrs. Clinton. These voters tended to be female, nonwhite, younger and more highly educated — the very voters Republicans feared would be alienated by a Trump victory when he was seeking the party’s nomination.

Most strikingly, one-third of 2012 Romney voters who were under 40 in 2016 did not vote for Mr. Trump, but rather stayed home, voted for Mrs. Clinton or voted for a third-party candidate. Among the under-40 Romney voters who supported Mr. Trump in 2016, 16 percent appear to have defected from the party to vote for a Democratic House candidate in 2018. Of course, we don’t know how they will vote in 2020, but what this means is that in the past two elections Republicans may have lost more than 40 percent of Romney voters born after 1976.

Republican House candidates performed worse among 18- to 39-year-olds than they have in decades. The voters Mr. Trump and his party lost in 2016 and 2018 represent the future of American politics.

Perhaps unsurprisingly, given Mr. Trump’s rhetoric, Mr. Trump shed a large share of 2012 Romney voters of color — precisely the type of voters that Republicans have been struggling to attract for some time.

But it is the graying of the Republican coalition that is arguably the biggest threat to the party’s prospects. It is true that on average, older people are more reliable voters than younger people. But the partisan identities and voting behaviors that people adopt early in the life cycle tend to stick, becoming routines that people carry on for the remainder of their lives.

Can Republicans solve their demographic problem? A look at issue preferences indicates wooing back defectors will be difficult. On crucial issues facing the country, Romney-to-Clinton voters, Romney-to-nonvoters and Americans over all hold positions that are relatively far from Romney-to-Trump voters.

Trump may have won the White House with a thin margin built on winning over just enough Obama voters in the right places. But this victory may ultimately have come at the expense of the Republican Party’s long-term electoral prospects. To win some of the Romney coalition back, Republicans would need to moderate their stances on some key issues, like immigration and trade, and, of course, exactly the opposite is happening.