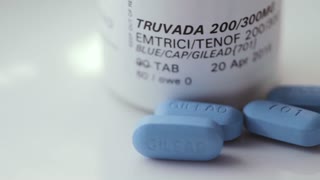 The Center for Disease Control and Prevention describes PrEP as follows:

Pre-exposure prophylaxis, or PrEP, is a way for people who do not have HIV but who are at substantial risk of getting it to prevent HIV infection by taking a pill every day. The pill (brand name Truvada) contains two medicines (tenofovir and emtricitabine) that are used in combination with other medicines to treat HIV. When someone is exposed to HIV through sex or injection drug use, these medicines can work to keep the virus from establishing a permanent infection.


When used consistently, PrEP has a very high success rate of preventing HIV infection. So why aren't many more Americans on PrEP if it works so well.  The answer is simple: the cost. In the USA, the cost can be over $20,000.00 per year. In other parts of the world, the cost is $100.00 per year.  Why do Americans pay 200 times what those in other countries?  Simply put, because American's utterly screwed up health care system allows it. Typically, pharmaceutical companies justify shockingly high costs by citing the cost of developing new drugs.  That argument does not work with PeEP because the federal government and charities funded the development costs. So again, why the exorbitantly high cost?  I offer a few other possible factors: (i) the current Trump/Pence regime caters to allowing large corporations to act as the robber barons of old, and (ii) gays and increasingly blacks, including black women, are disliked by the Trump/Pence regime and its extremist supporters.  As reported by the New York Daily News, in New York State, some are beginning to demand that federal government use its existing authority to make PeEP available to the masses, not just the rich.  Here are article highlights:

As the number of people in New York City living with HIV or AIDS continues to rise, local advocates are calling for the federal government to take steps to make the life-saving prevention drug PrEP more affordable.

City Council Speaker Corey Johnson joined other politicians and activists at the city’s AIDS Memorial on Monday to demand that the National Institute of Health “break the patent” on the drug, which dramatically reduces the spread of the HIV virus.

“It’s life or death for people who do not get access to this live-saving medication that they need,” said Johnson, who is HIV-positive. “Other countries pay $100 year for PrEP. Americans end up paying more than $20,000 a year for the same medication.”

Advocates say a major barrier between patients and PrEP is the cost of the drug, which is patented by Gilead Sciences and was approved for use by the FDA in 2012.

“Gilead Sciences charged over $2,000 a month for a drug that costs them less than $6 a month to make, and whose research was funded entirely by the fed govt and other charities,” Christian Urrutia, co-founder of the PrEP4All Collaboration, said on Monday.

Because the U.S. government funded the research for PrEP, federal law allows the NIH to exercise “march-in” rights to break its patent and allow other manufacturers to produce it at generic costs.

The legal maneuver dates back to 1980 and the passage of the Bayh-Dole Act, which requires patent holders of federally-backed drugs to allow third party companies to produce the drug when requested by the government.

The advocates are calling on the feds to make such a request for PrEP.  If the price of the drug plummets for New Yorkers, advocates believe the rate of new HIV infections would follow.

Posted by Michael-in-Norfolk at Wednesday, February 20, 2019

You know that's how they make their money. They'll gauge the public until the cows come home. I guess this is what got the gays of ACT UP go to the streets.