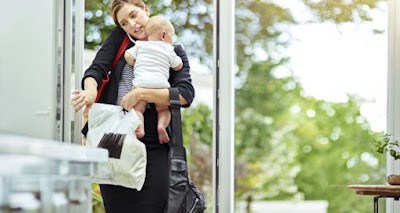 We hear incessantly about "family values" from the Christofascists and their political whores in the Republican Party, but when analyzed, their so-called family values boil down to being "pro-life" and anti-abortion, anti-gay, and whining about abstinence only sex-education.  None of the policy positions, however, include supporting children once they are born or supporting real families, particularly if those families are headed by single women or women of color. They idealize the mythical nuclear family with a working father/husband and a stay at home mother, ignoring that most families need BOTH parents working to simply survive financially.  In contrast, Democrats are advancing policy proposals that help to support and maintain real families. A column in the New York Times looks at one proposal by Elizabeth Warren - who I deem un-electable (she has burned many bridges already in Virginia in her attacks on Gov. Northam) - which would help real families. Hopefully, other electable Democrats will back similar proposals to exhibit true family values.  Here are column highlights:


For millions of Americans with children, life is a constant, desperate balancing act. They must work during the day, either because they’re single parents or because decades of wage stagnation mean that both parents must take jobs to make ends meet. Yet quality child care is unavailable or unaffordable.

And the thing is, it doesn’t have to be this way. Other wealthy countries either have national child care systems or subsidize care to put it in everyone’s reach. It doesn’t even cost all that much. While other advanced countries spend, on average, about three times as much as we do helping families — so much for our vaunted “family values” — it’s still a relatively small part of their budgets. In particular, taking care of children is much cheaper than providing health care and retirement income to seniors, which even America does.

Furthermore, caring for children doesn’t just help them grow up to be productive adults. It also has immediate economic benefits, making it easier for parents to stay in the work force.

So child care really should be an important part of the progressive agenda. Hillary Clinton had a serious plan back in 2016, but the news media was too busy obsessing over emails to pay attention.

[U]nlike purist visions of replacing private health insurance with “Medicare for all,” providing child care wouldn’t require imposing big new taxes on the middle class. The sums of money involved are small enough that new taxes on great wealth and high incomes, which are desirable on other grounds, could easily raise sufficient revenue.
Child care would be regulated to ensure that basic quality was maintained and subsidized to make it affordable. The size of the subsidy would depend on parents’ incomes: lower-income parents would get free care, higher-income parents would have to pay something, but nobody would have to pay more than 7 percent of income.

So what are the objections to this plan?  I’m hearing from a few people on the left who complain that the plan doesn’t go far enough — that it should involve free, direct public provision of child care, not subsidies to private provision. There’s certainly a case for a more expansive policy. There’s also no chance that it will happen anytime soon.  The perfect here is the enemy of the good.

Meanwhile, on the right there are the usual cries of “socialism,”  . . . .  More interestingly, I’m seeing at least some commentary on the right that doesn’t just push back against the whole idea of making it easier for mothers to work, it wants us to go back to the days when families could “live on one income.”

Realistically, of course, that’s not going to happen, and not just because 30 percent of U.S. children live in single-parent households.  And bear in mind that even as conservatives bemoan the decline of the traditional male breadwinner, they’re pushing policies like Medicaid work requirements that basically force mothers out of the home.

Right now, all of the real contenders for the Democratic nomination are solidly progressive, but so far some seem either under briefed on policy issues — there’s been far too much fumbling over Medicare for all — or too committed to sweeping, maximalist policy visions to think seriously about what they might truly be able to do if their party takes the White House and Senate next year.

Visions and values are great, but Democrats also need to be ready to hit the ground running with plans that might actually turn into legislation.

Wit two working  daughters with young children, I know first hand just how expensive decent child care is and how it can make stay home unemployed seem the better option.  Why give over the raising of your children to others if you final net pay after child care costs is negligible or non-existent.  More Democrats need to get onboard with rational and attainable plains to demonstrate true family values for working class families.
Posted by Michael-in-Norfolk at Friday, February 22, 2019