How Mitch McConnell Has Enabled Trump and Betrayed America 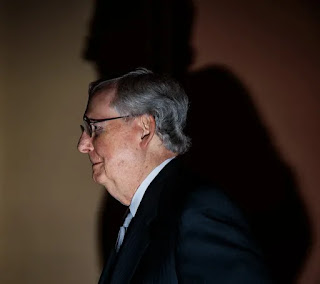 This blog - just like countless news articles and political commentary columns - has enumerated the many, many ways in which Donald Trump has harmed America's democracy and institutions. It Trump's not a Russian operative, he is nonetheless doing a great job of furthering Vladimir Putin's goals of destabilizing the west, causing disunity in the European Union (Putin's intelligence service interfered in the UK's Brexit vote), and dividing Americans into warring camps.   Often, however, focus is lost on the one man who has been key to aiding and abetting Trump in the infliction of harm on America and American interest: Senate majority leader, Mitch McConnell.  Should Mueller prove a conspiracy between Trump and Russia in flipping the 2016 presidential election, part of me cannot help but ponder whether McConnell was part of the conspiracy.  Let's not forget that McConnell cast doubt on CIA intelligence about Russia’s interference in the 2016 election and threatened that if Barack Obama publicly challenged Russia, McConnell would disingenuously make it into a partisan issue.  A column in the New York Times lays out all of the harm McConnell has done to the nation. Here are highlights:


Among the casualties of President Trump’s declaration of a national emergency to build his border wall is the reputation of the majority leader Mitch McConnell as a Senate institutionalist. The evidence of the last few days has confirmed, if there were still any doubt, that he is no such thing.

First, he helped prolong the longest government shutdown in American history by insisting that the Senate would act only with explicit approval from the president. Now Mr. McConnell has fully acquiesced in President Trump’s power grab by supporting an emergency declaration, which he opposed just weeks before, aimed at addressing a crisis that Senate Republicans know does not exist.

This display of obedience from the leader of a supposedly coequal branch of government is shocking only if you ever believed Mr. McConnell was an institutionalist. But his defining characteristic has always been his willingness to do anything and sacrifice any principle to amass power for himself. What separates him from the garden-variety politicians — what makes him a radical — are the lengths he is willing to go. Seeing this with clarity should help us grasp the danger to which he is subjecting the Senate — and, more important, our democracy.

The signs of Mr. McConnell’s malign influence were always there. Before he became a Senate leader, he dedicated himself to opening the floodgates for corporate money to flow into our political system. Mr. McConnell chased the McCain-Feingold campaign finance reform law all the way to the Supreme Court; the 2003 challenge to the law bears his name. Mr. McConnell lost that one, but his cause prevailed six years later when the Supreme Court overturned restrictions on corporate contributions in Citizens United.
In 2010, as minority leader, Mr. McConnell stated that his main goal was not to help our country recover from the Great Recession but to make President Obama a “one-term president.”
The two forces that characterized Mr. McConnell’s career, obstruction and increasing the power of corporate money in our democracy, have worked hand in hand to diminish the Senate and paralyze American politics.
Republicans actually took the Senate majority in 2014 in large part on claims to restore the Senate. Unsurprisingly, they broke their promises. Under President Trump, Mr. McConnell continued to run roughshod over Senate traditions, jamming the $1.5 trillion tax bill through without so much as a proper hearing. The one place the Senate has functioned efficiently is in judicial confirmations, but even here Mr. McConnell has cast aside bipartisan norms and reduced the Senate to a rubber stamp for some unqualified, extremist judges, including those rated “unqualified” by the American Bar Association.  Mr. McConnell is not playing three-dimensional chess. There is no grand strategy or long game — there is only what best serves his narrow interest.

Mr. McConnell has rigidly adhered to whatever the base wants, institutions be damned. When the base wanted Judge Merrick Garland blocked, he obeyed. When the base wanted Mr. Trump embraced, he obeyed.
The crass self-interest at so many turns now poses a danger to our democracy. With Mr. Trump increasingly erratic and Robert Mueller’s investigation advancing, there is simply no reason to believe he will stand up for American institutions when it counts. He has already demonstrated a willingness to put his self-interest above America’s national security: In a classified briefing in 2016, Mr. McConnell reportedly cast doubt on C.I.A. intelligence about Russia’s interference in our election and threatened that if President Obama publicly challenged Russia, he’d twist it into a partisan issue. And when the four congressional leaders drafted a bipartisan letter to the states urging them to take action to protect our election infrastructure against Russian interference, Mr. McConnell categorically rejected all efforts to strengthen the letter.

Last week, Mr. McConnell had a choice. He didn’t have to acquiesce to the emergency declaration — he could have asserted the Senate’s independence at a critical time by passing the spending bill without validating Mr. Trump’s emergency declaration. If that prompted a veto, Mr. McConnell could have overridden it. That would be real leadership, and a clear assertion of the Senate’s independence. Instead, he meekly acquiesced in another presidential power grab.

Under a strong leader, the Senate could provide a critical counterweight to an out-of-control executive. Instead, we have a man who will put his self-interest first, every single time. We should enter this chapter with clarity and finally see Mr. McConnell for what he is. He’s not an institutionalist. He is the man who surrendered the Senate to Donald Trump.

Not only is he not an institutionalist, but if he aided the Trump/Russia effort in any way, he is also likely a traitor.
Posted by Michael-in-Norfolk at Monday, February 18, 2019

"but if he aided the Trump/Russia effort in any way,"

IF?? I think you are being a bit generous, Michael In addition to all the points you enumerated, we should not forget his apparent uncritical acceptance of millions of dollars of curious origin to be shared with other would-be puppets of Putin's puppet.

Heh.
Likely a traitor? After everything he's done to enable Cheeto to corrupt the office of the President and the gains he's making for personal profit? The turtle is compromised. He's compromised morally and most probably monetarily too. The GOP is cesspool of corruption.