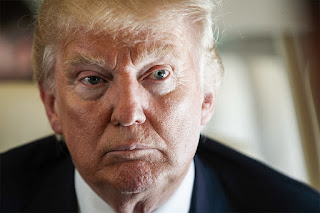 Republicans now engaged in prostituting themselves to Donald Trump and his racist base will likely come to rue the day that Trump, out of political desperation, invoked the pretense of a national emergency to try to take funds from other programs and the military to build his southern border wall to please his foul, racist base. The move, if not blocked by the courts will set a precedent that future Democrat presidents will likely invoke to push much more real emergencies such as gun control or climate change that will see "conservatives" witness the gutting of resistance to some of their sacred cows of dogma.  One body that might block Trump's dangerous move is the U.S. Senate, but do not count that to happen with Mitch McConnell, a man who after Trump has perhaps done the most harm to America's democracy, as a majority leader. A column in The Atlantic looks at the Republican's likely support of Trump's illegal act and how it will come to haunt them.  Here are highlights:

[Trump] The president seems to think he’s found a way out of the crisis. No, not the “crisis” at the border—if the word still has any universally accepted definition, there is no crisis at the border.

According to U.S. Customs and Border Protection, 2018’s apprehensions along the southwestern border were the fifth lowest in nearly half a century. Last year’s records show modest growth from 2017, when apprehensions were lower than at any point since 1972.

For Donald Trump, the crisis isn’t humanitarian but political. It is a crisis of confidence. He staked his reputation on constructing a wall along the southern border, and he’s not going to get one. Republicans in Congress had two years to appropriate the $25 billion Trump initially sought for a contiguous partition along the border, and they passed on it at every available opportunity. Trump transformed the 2018 midterm elections into a referendum on the notion that a humanitarian disaster was unfolding at the border and the wall was the only answer. Voters were not convinced.
Having lost face at the polls, Trump sought to demonstrate who’s still the boss by demanding tribute from ascendant Democrats—a mere $5.7 billion, not for a wall per se, but for “steel slats” along a few miles of the border. He didn’t get it. Indeed, Trump will sign a compromise today that appropriates only $1.375 billion for fencing and border-security enhancements—less than what the GOP-led Congress was prepared to allocate at the end of 2018.
Amid this unambiguous series of defeats, Trump resolved to get his border-wall funding by other means: He said in a rambling press conference today that he would invoke the National Emergencies Act, under which he plans to circumvent Congress and reallocate approximately $8 billion apportioned to the Treasury and Defense Departments to construct his barrier along the border with Mexico. This is a staggeringly cynical maneuver not because it will finally hand Trump the MacGuffin on which he campaigned in 2016, but because it most likely won’t.

Legal observers expect the courts to impose an injunction on this national-emergency declaration as soon as it is made. Indeed, the president made the judiciary’s work easier on Friday when he admitted that he “didn’t need to do this,” a confession that there is, in fact, no ongoing national emergency. A judicial quagmire is the GOP’s fondest hope. . . . And all without ever having to expropriate private property along the border or prove the dubious efficacy of a physical wall. Everybody wins!

This is an especially dangerous game, in part because it further degrades the Madisonian scheme in which each branch of government is supposed to be a jealous steward of its constitutional prerogatives. . . . [Trump] The president will radically expand the definition of what constitutes an emergency, the relevant statutes of which are supposed to be applied only when Congress cannot be consulted on the matter in a timely fashion. By appealing to the military to resolve a domestic policy dispute, Trump is actively eroding America’s sense of civic propriety.

Even if Trump’s decision to invoke national security to erect his wall is stopped indefinitely by the courts, we may look back upon this moment as the crossing of the Rubicon. Congressional Democrats aren’t even being coy about their desire to expand on this precedent when their party regains control of the White House. “Want to talk about a national emergency?” asked Speaker Nancy Pelosi. “The epidemic of gun violence in America. That’s a national emergency.” There is no shortage of Democrats who are similarly convinced that climate change also represents an existential crisis, to say nothing of a national emergency. Many have endorsed draconian anti-industrial policies that are unlikely to pass in Congress as the only rational remedy to the crisis. The next president will undoubtedly face pressure from his or her core constituents to apply the precedent Trump is setting to their domestic policy priorities.

Maybe the most pernicious effect of the president’s extraordinary maneuver here is how he will drag complacent Republicans along with him into the abyss. Once invoked, 50 U.S. Code § 1622 on national emergencies sets into motion a series of events, including an almost immediate vote by the House of Representatives ratifying the president’s decision. The House will certainly reject Trump’s national-emergency declaration, sending that motion to the Senate, where it cannot be tabled. And that GOP-controlled chamber will be compelled to support Trump’s transparently political debasing of constitutional norms, not because of support for Trump, but because of pressure from Majority Leader Mitch McConnell.

Let’s not mince words: Backing Trump in this moment is not the prerogative of an institutionalist, which the majority leader claims to be. It is the prerogative of a partisan operator motivated, above all, by deference to a fleeting political imperative: avoiding another government shutdown.

This is a moment of extreme national cowardice. America’s governing institutions are abdicating their authority in pursuit of expedience and amid a craven scramble to save face. A precedent has been established that all Americans, but conservative Americans in particular, will long regret.

Posted by Michael-in-Norfolk at Sunday, February 17, 2019

Fingers crossed people remember this when they go vote!
If there’s no action, it’s all words.