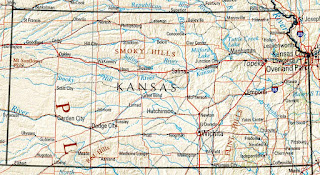 Survey after survey shows that younger voters across the country support same sex marriage.  Other surveys show that a majority of the 40% of Millennials who have walked away from religion to join the ranks of the "Nones" cite anti-gay extremism and homophobia as the leading motivation - the hypocrisy of evangelical Christians is not far behind - for leaving.  So what are Kansas Republicans doing?  Pushing a bill that would ban same sex marriages in that state.  With a new Democrat governor, the bill has little likelihood of becoming law, yet the Republicans continue to engage in this type of batshitery at the very time the GOP is hemorrhaging younger voters.  (Tennessee Republicans unsuccessfully pushed a similar bill in that state).  A piece in The Advocate looks at this insanity.  Here are excerpts:

Some Kansas legislators are pushing a bill that would classify same-sex marriages as “paody marriages” and prevent the state from recognizing them.

The bill has no chance of becoming law under the state’s new Democratic governor, who would undoubtedly veto it, plus it would be unconstitutional under the 2015 Supreme Court marriage equality ruling. But anti-LGBTQ politicians in Kansas are seeking to make same-sex marriage an issue as the legislature considers a measure to ban discrimination based on sexual orientation and gender identity, The Wichita Eagle reports.

“[Same-sex couples’] marriage probably doesn’t affect me — their union or whatever you want to call it. But in my opinion, they’re trying to force their beliefs on society,” Republican Rep. Randy Garber, the bill’s lead sponsor, told the paper. Garber’s legislation comes shortly after the introduction of a Tennessee bill that seeks to keep that state from recognizing same-sex marriages.

Garber acknowledged that calling same-sex unions “parody marriages” is “kind of harsh,” but he believes the only true marriages are male-female couplings. In addition to his measure to stop same-sex marriages, he is sponsoring another one that would create something called “elevated marriage” for opposite-sex couples and make it more difficult to get a divorce.

His legislation calls sexual orientation “mythology” and says it is different from race because “there are no ex-blacks but there are thousands of ex-gays.”

he Kansas legislature got its first two LGBTQ members in last year’s election, and they objected strongly to Garber’s move, as did activists.

Tom Witt, executive director of Equality Kansas, called Garber’s bills the “most vile, hateful and disrespectful legislation” he has seen during his career. “Every year, we see bills that restrict, remove, and limit the rights of LGBT Kansans, but never have we seen this level of extremist vitriol laid out in legislative language. These bills combined are 18 pages of insults and name calling,” he told the Eagle.
NBC News has now reported that the language in Garber's bills is copied from drafts created by Chris Sevier, an anti-LGBTQ activist who filed lawsuits in several states seeking to marry his laptop computer. Sevier took credit in a Facebook post, but he declined comment to NBC on the matter, as did Garber. Bills with that language were introduced in Wyoming and South Caroline last year and went nowhere, NBC notes.
The antidiscrimination legislation is sponsored by Ruiz and the legislature’s other new member from the LGBTQ community, Democratic Rep. Brandon Woodard. “I think the voters of Kansas have made it very clear that we should be open and inclusive to all Kansans,” Woodard, a gay man, told the paper. His bill, which would ban anti-LGBTQ discrimination in housing and employment, has many more cosponsors than Garber’s marriage bills.

Laura Kelly, the Democrat elected governor of Kansas last year, has signed an executive order banning discrimination against state employees on the basis of sexual orientation and gender identity, but Woodard’s bill would cover private companies as well.

Posted by Michael-in-Norfolk at Sunday, February 17, 2019

Insulting LGBT people brings joy to these disgusting scabs on the American political scene. Our community would largely be happy to be quiet, private, cooperative citizens. We improve our communities and support our neighbors. But the constant assaults of people who hate us for our identity continues to fuel the anger among us. Hate begets hate. Perhaps these deplorables will die soon. One can hope.