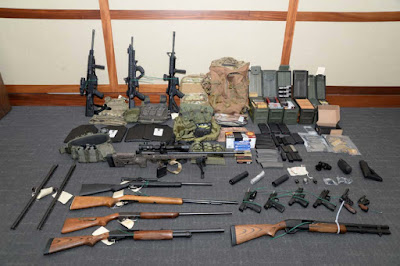 Since he launched his campaign in 2015, Donald Trump has been singing a welcomed song to racists and white supremacists of every ilk.  By doing so, he has made out right racism acceptable in the eyes of his followers and has increasingly normalized the reprehensible. Worse yet, he has emboldened hate groups which have increased 30% over four years and some, such as would be terrorist,  Christopher Paul Hasson, have seen Trump's rhetoric as a green light to attack Democrats and journalists.  A piece in the Washington Post looks at Hasson's thwarted terror attacks while a piece in New York Magazine looks at the increase in the number of far right hate groups.  First, highlights from the Post:


A U.S. Coast Guard lieutenant and self-identified white nationalist was arrested after federal investigators uncovered a cache of weapons and ammunition in his Maryland home that authorities say he stockpiled to launch a widespread domestic terrorist attack targeting politicians and journalists.

Christopher Paul Hasson called for “focused violence” to “establish a white homeland” . . . Though court documents do not detail a specific planned date for an attack, the government said he had been amassing supplies and weapons since at least 2017, developed a spreadsheet of targets that included House Speaker Nancy Pelosi (D-Calif.) and searched the Internet using phrases such as “best place in dc to see congress people” and “are supreme court justices protected.”

“The defendant intends to murder innocent civilians on a scale rarely seen in this country,” the government said in court documents filed this week, arguing that Hasson should stay in jail awaiting trial.

“Please send me your violence that I may unleash it onto their heads,” Hasson wrote in a letter that prosecutors said was found in his email drafts. “Guide my hate to make a lasting impression on this world.”

Court documents do not detail what prompted federal law enforcement to begin investigating Hasson but contend that Hasson had been studying the 1,500-page manifesto of right-wing terrorist Anders Behring Breivik, who unleashed two attacks in 2011 that killed 77 people in Norway, and echoed Breivik’s attack preparations.

One individual like Hasson is frightening enough, but as the New York Magazine article reports, there has been a sharp increase in the number of active hate groups.  Here are article excerpts:

There are at least 1,020 hate groups now active in the U.S., the Southern Poverty Law Center announced on Wednesday. The civil rights group, which has tracked extremist activity since the 1980s, says it’s documented a 30 percent increase in hate group activity over the last four years, a time period it says “roughly” coincides with end of Barack Obama’s presidency and the rise of Donald Trump as a political figure.

SPLC argues that [Trump’s] the president’s vitriolic anti-immigrant rhetoric and soft-pedaling of white supremacist violence have emboldened hate groups.
[I]t’s undeniable that members of the far-right have been responsible for an escalating number of high-profile violent incidents over the last several years. It’s also true that Trump, and some of his surrogates in the conservative press, have helped mainstream certain white nationalist myths. Both Trump and Fox’s Tucker Carlson briefly became fixated on the alleged persecution of white South African farmers, though there’s no evidence of a white genocide unfolding in South Africa or anywhere else, and Trump frequently amplifies myths about the disproportionate criminality of immigrants. Since Trump took office, white nationalists have beaten left-wing activists and murdered one protester . . . .
This radicalization shows no signs of abating. Hours after the SPLC released its report, Seamus Hughes of the the George Washington University’s Program on Extremism broke the news that a lieutenant in the U.S. Coast Guard will go on trial for domestic terrorism charges. The lieutenant, Christopher Hasson, identified as a white supremacist, possessed around 1,000 rounds of ammunition, and created a hit list of liberal politicians and media figures ranging from House Speaker Nancy Pelosi to MSNBC’s Chris Hayes.
Trump hasn’t explicitly called for people like Hasson to do violence in his name. But the SPLC’s report reinforces a disturbing trend. However frustrated white supremacists may be over the border wall, others seem galvanized by the Trump presidency.

Posted by Michael-in-Norfolk at Thursday, February 21, 2019