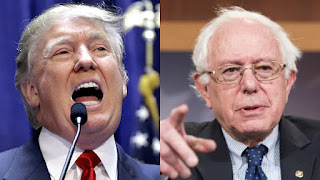 As the 2020 Democrat primary begins, one issue that will be critical, in my view, for Democrats to keep sight to the reality that politics is all about having your team – flawed or not – in control of the executive branch of government, especially if you do not hold complete control of the legislature.  One cannot wait for the perfect candidate.  The bottom line is to win elections and field the candidate best positioned to win.  Who that candidate will be is as yet unknown,  That said, I see two as un-electable: one is Elizabeth Warren who despite some good ideas, has far too much baggage.  The other is Bernie Sanders, who in my view, should not even be allowed into the Democrat race given his jettisoning of the party immediately after 2016. Sadly, this reality is lost on Bernie Sanders supporters who, in my view, delude themselves into thinking that Sanders has broader support than he has in fact, especially among working class whites, and without factoring in some of Sanders' extreme positions of the past.  A piece in New York Magazine looks at the myth of Sanders' working class support.  Here are highlights:


The Sanders campaign has circulated a strategy memo proclaiming their candidate would compete with Trump not only in Michigan and Ohio but even in states like West Virginia, Kansas, North and South Dakota, Nebraska, Oklahoma, and Montana. Sanders “is popular with traditional, working-class, industrial workers in those places,” asserts his adviser, Jeff Weaver. “Bernie Sanders,” raves Bhaskar Sunkara, “is the only one capable of reaching millions of working Americans with the message that politics can indeed improve their lives.”

Their evidence is the persistent support Sanders amassed during his struggle against Clinton. But there is something eerily familiar about the pattern of Sanders’s support in 2016. Nate Silver, diving into the numbers, finds that about a quarter of Sanders voters were what he calls “Never Hillary” voters. They leaned conservative, and many of them voted for Donald Trump in the general election.
How big a factor was the Never Hillary vote for Sanders?  Pretty big. They made the difference in eight of the states he won, finds Silver. Without that protest vote, the entire narrative of Sanders as the rising voice of the party’s authentic base would never have taken hold. And that basic misreading of the data created the foundation for a flourishing socialist dream that the American white working class is poised to turn against neoliberalism if only presented with a pure and sharp enough critique.
Ironically, Sanders supporters have made the same analytic error the Clinton fans made after 2008. They looked at their growing strength among the white working class and saw a future base they could pry away from the GOP, never realizing that the only reason those voters had ever supported them was that they had already lost.

It is absolutely critical that Trump, should he run, or Mike Pence, be defeated in 2020.  Sanders simply is not the one to do that.
Posted by Michael-in-Norfolk at Saturday, February 23, 2019