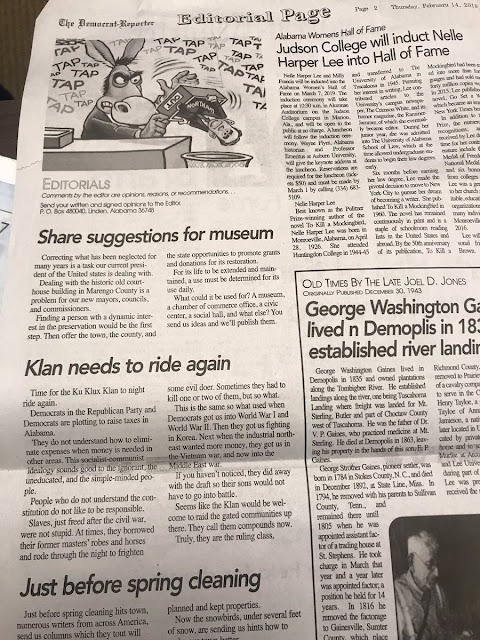 Alabama is one of the states where Donald Trump is the most popular.  Therefore, it should be no surprise that one small Alabama newspaper in Linden, Alabama (I actually drove through this town years ago when traveling from Mobile to Tuscaloosa for law firm business) in that state's "Black Belt," has run an editorial urging for the return of lynchings and the night riders of the KKK.  It speaks to (i) the deep seated racism that still persists, especially in rural areas of the South, and (ii) the manor in which Trump has given open racists the nod to spew their hatred in public.  Perhaps Alabama has always remained racist, but at least 40 years ago when I lived in that state, people at least put a veneer of decency over their true selves.  Now, Trump has made open racism acceptable - at least among his toxic base.  A piece in the Washington Post looks at the batshitery that now passes as journalism in rural Alabama.  Here are excerpts:

Goodloe Sutton is back in the news again — this time because he recently called for mass lynchings and suggested that the Ku Klux Klan should return to “clean out” Washington.

“Time for the Ku Klux Klan to night ride again,” began a Feb. 14 editorial in the paper [the Democrat-Reporter newspaper in Linden, Alabama], which went on to claim that Democrats, along with some Republicans, were planning to raise taxes in Alabama. It concluded, “Seems like the Klan would be welcome to raid the gated communities up there.”

Sutton, who is also the paper’s publisher, could not immediately be reached for comment. He told the Montgomery Advertiser on Monday that he had written the editorial, which ran without a byline, and stood by it.

“If we could get the Klan to go up there and clean out D.C., we’d all been better off,” he told the paper, explaining, “We’ll get the hemp ropes out, loop them over a tall limb and hang all of them.”

During the same conversation, Sutton argued that the KKK “didn’t kill but a few people” and “wasn’t violent until they needed to be,” the Advertiser reported on Monday. He further suggested that the Klan, a white supremacist hate group, was comparable to the NAACP. Sutton also added that people could call him, write him a letter or boycott the paper if they disagreed with his views.

When the Advertiser’s Melissa Brown asked him whether it was appropriate for a newspaper publisher to suggest that Americans should be lynched, Sutton replied, “It’s not calling for the lynchings of Americans. These are socialist-communists we’re talking about. Do you know what socialism and communism is?”

The editorial — which, like the rest of the paper, was not published online — first started getting attention on Monday afternoon when two student-journalists at Auburn University posted photographs on Twitter. On Monday night, Sen. Doug Jones (D-Ala.), who prosecuted two members of the Klan for their role in the 1963 Birmingham church bombing that killed four young girls, called the editorial “disgusting” and demanded Sutton’s immediate resignation. “I have seen what happens when we stand by while people-especially those with influence- publish racist, hateful views,” he wrote.

Echoing the call for Sutton’s resignation was Rep. Terri A. Sewell (D-Ala.), who wrote, “For the millions of people of color who have been terrorized by white supremacy, this kind of ‘editorializing’ about lynching is not a joke — it is a threat."

When Sutton’s comments on the Klan began getting attention on Monday, longtime readers pointed out that it wasn’t the first time that the paper’s editorial page had endorsed extreme or openly racist views. In May 2015, an editorial stated that the mayor of a city “up north” had “displayed her African heritage by not enforcing civilized law.” Another, published in June of that year, called for drug dealers, kidnappers, rapists, thieves, and murderers to be hung “on the courthouse lawn where the public can watch.”
Barack Obama was described by the paper as a “Kenyan orphan president” who was elected because Americans thought “it would be cool to have a colored man” in the White House. Later, amid the national controversy over football players kneeling during the national anthem, the Democrat-Reporter declared, “That’s what black folks were taught to do two hundred years ago, kneel before a white man.”

Since the editorials are run without a byline, it’s unclear which, if any, were written by Sutton. Archived editions of the Democrat-Reporter from 2012 to 2017 indicate that he was responsible for overseeing editorial content, and that the paper’s two or three other staff members were in charge of tasks like layout and production. A since-deleted post on a journalism forum indicates that as recently as December, Sutton had been trying to sell the paper, which he inherited from his father in the 1980s.

To some local lawmakers, the news that the Democrat-Reporter’s publisher was wishing for the return of the most notorious hate group in American history came as no surprise.

"That kind of ignorance is the reason I don’t even subscribe to the paper,” A.J. McCampbell, a Democratic state representative, told AL.com.

This kind of explicit racism will do nothing to aid progressives in Alabama in their efforts to attract new and innovative businesses and drag the state out of  the 1950's that is so pervasive in rural parts of the state.  Frighteningly, the same mindset is alive and well in rural areas of Virginia, especially Southwest Virginia.
Posted by Michael-in-Norfolk at Tuesday, February 19, 2019

When you think that the pernicious influence of Cheeto had dragged the last racist out of the closet.
This is disgraceful. Truly disgraceful.

As reported in yesterday's Washington Post, the "very fine people" of Taneytown, Maryland want to erect a memorial to John Wilkes Booth!! As part of explaining "both sides" of the Civil War.


It would seem an unthinkable proposal right now, what this small and quaint town in rural Maryland is considering.

Because while the rest of the nation is having a deep reckoning with the statues and monuments of the Civil War, this picture-perfect town is thinking of building a new one.

A big one. One officials hope will attract buses and tourists and bring prosperity to their small town.

Except what they get may be notoriety.

The proposed memorial — imagined by a sculptor who is on the let-the-Confederate-battle-flag-fly side of the argument — could be the only one in the nation to include both a president and his assassin.