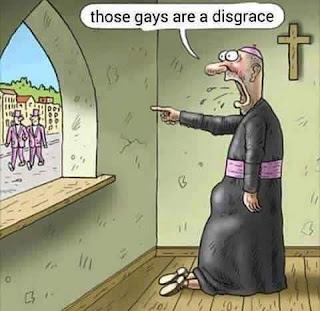 As most readers know, I was raised Catholic and it took years of therapy to undo the psychological damage that a Catholic upbringing did to me. Thankfully, the media is finally publicizing the hypocrisy and moral cesspool that is the Church hierarchy with stories that expose things ranging from the sexual abuse of nuns by priest, special policies for priests who father children, to the global cover up of an immense sexual abuse problem that has targeted children and youths likely for seven decades, if not centuries.   A recent piece in the New York Times looked at the plight of gay priests and the hypocrisy of their treatment by the Church hierarchy.  One can perhaps find little sympathy for them given that one can argue that they knew what they were getting into, yet the mental and emotional anguish they describe in many ways describes what everyday LGBT people unfortunate to be born into the Church experience.  The fear of discovery, self-loathing, and fear of rejection are only too real and can be soul killing.  What is perhaps more instructive to the masses of the Church laity about the moral bankruptcy of the Church leadership is the viciousness that the Church directs towards non-clergy individuals who rightly or wrongly worked for the Church's institutions to help others.  A column in the New York Times looks at the witch hunt for LGBT Catholics within the Church.  Here are excerpts:

Pat Fitzgerald, 67, has long loved being a Catholic, and the part he loved maybe most of all, for the past quarter-century, was his role as a spiritual mentor at retreats for students at a church-affiliated high school in Indianapolis, where he lives.

But he has been told that he’s not wanted anymore. His crime? He publicly supported his daughter, a guidance counselor at the school, after its administrators moved to get rid of her because she’s married to a woman.

The school’s treatment of Shelly Fitzgerald, 45, was a big local story last summer that went national; she ended up on “The Ellen DeGeneres Show” in September. It was one of many examples of Catholic institutions deciding almost whimsically to exile longtime employees — not priests or nuns but coaches, teachers, counselors — who had long been known to be gay but were suddenly regarded as liabilities.

That’s what happened to Shelly Fitzgerald, and her 14 years of fine work at Roncalli High School no longer mattered. Only her 2015 marriage to her longtime partner did. She was told that she could stay on if she dissolved the union. She said no thanks and was kicked off school grounds in August.
The aftershocks still complicate the lives — and faith — of people around her: her students, their parents, her dad.
But there’s no peace for the Catholic Church here. It’s too mired in its own hypocrisy. The tension between its official teaching and unofficial practice — between the ignorance of the past and the illumination of the present — grows tauter all the time.
Most Catholics support same-sex marriage, in defiance of the church’s formal position, and many parishes fully welcome L.G.B.T. people. Yet there are places, and times, when the hammer comes down.

Church leaders know full well that the priesthood would be decimated if closeted gay men were exposed and expelled. Yet the church as a matter of policy bars men with “deep-seated homosexual tendencies” and considers gay people “objectively disordered.”
Catholics are supposed to show compassion. Yet Shelly and her dad were shown anything but.

There is, by many accounts, profound anger and hurt at Roncalli. As it happens, Shelly was one of two directors of counseling there; the other, Lynn Starkey, 62, is in a same-sex civil union and in November filed her own charge of discrimination with the E.E.O.C., claiming a “hostile work environment” in the aftermath of Shelly’s departure. For now she remains on the job.

Many students started an L.G.B.T. advocacy group, Shelly’s Voice, that also attracted parents and other adults in the community. A related Facebook page, Time to Be a Rebel, has more than 4,500 members.

But one parent told me that students who question Shelly’s dismissal fear repercussions. “Seniors are being told that if they speak out, they take the chance of not being able to graduate,” the parent, who spoke with me on condition of anonymity, said.
[A] small cluster of Roncalli students were invited last month to a lunch with Archbishop Charles C. Thompson of Indianapolis, only to have him stress that homosexuality is a disorder and its expression sinful. One student called it an ambush.
Shelly pointed out that the Catholic Church isn’t generally going after teachers who flout its rules by using birth control or divorcing or having sexual relations outside marriage. “They’re going after L.G.B.T. people,” she said. “They’re going to die on this hill.”

And they’re going to hurt people — like Shawn Aldrich, who attended Roncalli, just as his parents and his wife and her parents did. He has two children there now. What has happened to Shelly astounds him.

Shawn Aldrich has made the only decision that perhaps over time will force change and the end of rank hypocrisy within the Church leadership: walking away.  If enough decent and moral Catholics walk away, schools such as Roncalli will close as will parishes and the toxic hierarchy will have to decide between allowing the Church to wither away (at least outside of ignorant and uneducated parts of the world) or leaving its 12th century dogma.  For me, walking away was one of the most positive things I have ever done.
Posted by Michael-in-Norfolk at Wednesday, February 20, 2019