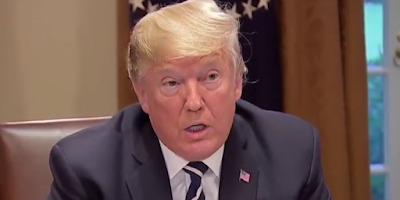 In a recent post I conjectured that the reported Trump/Pence regime effort to decriminalize homosexuality in foreign nations where being gay is illegal (if not the basis for receiving the death penalty) could all be a charade.  Some thought the true goal of the purported initiative was to woo European Union nations into joining in sanctions against Iran, others simply found it lacking in credibility give the Trump/Pence regime's anti-LGBT record since assuming office.  Now, it is being reported that when asked about the effort, Der Trumpenführer knew nothing about it.  As for Pence, he quickly turned the conversation to Iran thereby adding justification for those who saw this as an anti-Iran stunt from the start.  Here are excerpts from the Washington Examiner:

President Trump drew a blank Wednesday when told about his own administration's push to legalize homosexuality across the globe.

A reporter asked Trump in the Oval Office about "your push to decriminalize homosexuality around the world," asking, "Are you doing that and why?"

Trump said, however, "I don't know which report you're talking about. We have many reports."

White House representatives did not immediately respond to a request for comment on whether Trump was aware of his administration's push to repeal anti-homosexuality laws in 71 countries.

On Tuesday, NBC News reported that the Trump administration was preparing for a global effort to decriminalize homosexuality, which is banned in many African, Caribbean, and Muslim countries.

The push is spearheaded by U.S. Ambassador to Germany Richard Grenell, the most prominent gay official in the Trump administration. Grenell's effort began Tuesday with a gathering in Berlin.

A piece in the Washington Blade looks at Pence's response for comment.  As noted, Pence quickly turned the conversation to Iran.  As for Pence's true feelings towards gays, his past shows that he is no ally.  I cannot believe the Trump/Pence regime's supporters among the Christofascist are the least bit happy about any effort to decriminalize homosexuality.  Here are highlights from the Blade:

The global initiative seems aimed at highlighting the human rights record of Iran, a country that punishes homosexual acts with death. Highlighting Iran’s record is an independent goal Pence has made for himself, as evidenced by a speech he delivered earlier this month in Warsaw, Poland.

“The authoritarian regime in Tehran represses the freedom of speech and assembly, it persecutes religious minorities, brutalizes women, executes gay people, and openly advocates the destruction of the State of Israel,” Pence said. “The Ayatollah Khamenei himself has said, ‘It is the mission of the Islamic Republic of Iran to erase Israel from the map.’”

Pence’s support for an initiative to decriminalize homosexuality stands in contrast to his long anti-LGBT record as both a U.S. House member and Indiana governor.

As Indiana governor, Pence signed into law a “religious freedom” measure widely criticized for allowing individuals and businesses to refuse service to LGBT people. . . . . After an outcry from LGBT rights supporters and the business community, Pence was forced to sign a “fix” limiting the ability to discriminate under the Indiana law.

All in all, I remain a major skeptic about this alleged effort to decriminalize homosexuality across the globe.  I'd love to see it happen, but this effort is diametrically opposite of everything Trump and Pence have done over the past.

Posted by Michael-in-Norfolk at Wednesday, February 20, 2019

LOL
Of course Cheeto has no idea of anything that's going on that does not have his picture or his name on it. His government has messed up trans people in the military, has homophobes in the vice presidency and a troupe of right wingers as advisors. Friend of the gays my ass.