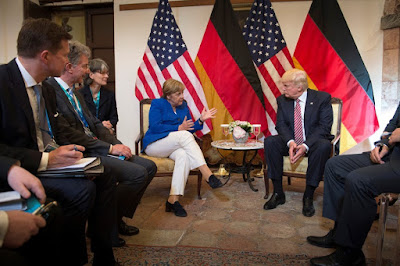 Donald Trump - like perhaps a majority of his supporters in my opinion - is basically a know nothing.  He doesn't read, gets his "news" primarily from Kook-Aid serving Fox News, dislikes briefing reports if they are more than a single page, and in general appears to have little interest in doing the work required to be president.   Combine this with his inward looking "America First" narrative that belittles other nations and is blind to the importance of foreign trade in projection American power and it is a recipe for disaster.  A column in the Washington Post by an economist equates Trump's policies to date as a huge surrender of American power and influence across the globe.  Here are column highlights:

President Trump’s foreign policy, such as it is, rests on a massive and apparently indestructible contradiction. Trump wants the United States to remain the “essential” nation, the best embodiment of Western ideals of freedom and democracy, while at the same time deliberately alienating many of our traditional allies, whose support the United States desperately needs. American leadership becomes difficult, if not impossible.

It is hard to straddle this contradiction, because it reflects a basic misunderstanding of the American “greatness” that Trump so avidly pursues. To Trump, this greatness is mainly measured in economic terms: the number of added jobs; the trajectory of wages; the rate of economic growth. It is a nostalgic and unrealistic yearning for the economic dominance the United States enjoyed in the 1950s and 1960s.

The truth is that American greatness then and later was never about dollars and cents alone. Prosperity was a means to an end, not an end in itself. The greater objective was to promote democracy and mixed economies, with power divided between the market and government. To advance this vision, the United States advocated open trade and provided a military umbrella. The latter created a geopolitical shield against instability.

Trump sees the costs of these programs as showing that past U.S. leaders were willing to sacrifice the interests of ordinary Americans to meaningless global cooperation. . . .  these complaints, they were (and are) fundamentally misleading. The notion that Americans simply abandoned their own interests for Japan’s, Germany’s or South Korea’s — to select a few obvious countries — is counterfactual. . . . Our economic and political interests were served by a prosperous and increasingly democratic global system.

As “grand strategy,” the post-World War II American conception of the world order largely succeeded. The global economy grew richer. A wealthier Europe established stable democracies. The Soviet Union collapsed. America benefited from all of this.

But as Trump has surely discovered, running an outward-looking, internationalist foreign policy is hard when your domestic policy is nationalist and inward-looking. Abroad, the balancing act has backfired. . . . A recent Pew Research Center poll of 40,448 respondents in 37 countries finds a big drop in favorable views of the United States.

As a result, it’s harder for Trump to lead internationally. Foreign leaders can more easily oppose him without suffering adverse domestic political consequences. He has made it even harder by antagonizing other countries by withdrawing from the Paris agreement on climate change. There was no need; all the pact’s goals are voluntary.
He quit the Trans- Pacific Partnership — a trade agreement with 11 other Pacific Rim nations; many economists consider this a blunder, because Asian economies are among the fastest-growing. And last week, Europe and Japan announced they’re negotiating a trade agreement that covers 40 percent of world trade and excludes the United States. Being outside these agreements would weaken U.S. exports. Further, the European Union warns it might retaliate against the United States if Trump restricts Europe’s steel exports.

What we’re witnessing is extraordinary: a voluntary surrender of power and influence. . . .  history suggests that trade and geopolitics go hand in hand. To deal with North Korea, Trump needs allies to make economic sanctions tougher or to support military action. He has precious few because he has been so careless in abdicating responsibility for the global trading system.

Putting an ignorant narcissist in the White House will likely cost America dearly.  Bigots and white supremacists may feel empowered and free to swagger, but the country as a whole will be the loser.
Posted by Michael-in-Norfolk at Monday, July 10, 2017