LGBTQ Rights Are In Danger Of Being Rolled Back 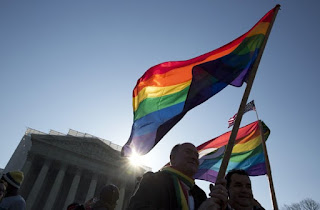 My relationships with a number of "friends" who voted for Donald Trump remained strained as some of my worse fears of a Trump/GOP victory continue to be realized.  Why?  The answer is simple: such people have set in motion what may prove to be extremely harmful to me personally and virtually every LGBT American.  Already, Trump and his regime have rolled back a number of LGBT non-discrimination protections.  Sadly, I suspect that the worst is still to come and I believe that many in the LGBT community and among our straight allies underestimate the harm that Der  Trumpenführer and his Christofascist and evangelical Christian seek to inflict.  It is worth remembering that while anti-Semiticism was common in pre-Nazi Germany, few Germans would have dreamed that Hitler and his regime would murder millions of Jews.  Then, like now, it was believed that public opinion would prevent such a wholesale murder of millions.  Justice Neil Gorsuch has shown himself to be an extreme enemy of LGBT equality.  Here in Virginia GOP attorney general candidate, John Adams, is equally hostile towards LGBT citizens. Can LGBT Americans safely rely on growing public acceptance to protect them?  A piece in HuffPost, which I sadly agree with, argues that we cannot.  Here are column highlights:

I’ve many times discussed “victory blindness,” brought on by the seduction of big wins for civil rights and which has had many gay, lesbian, bisexual and transgender people believing they’ve “arrived” ― that LGBTQ rights are secured ― while not seeing the perils ahead.

From as far back as 2014, watching the way that anti-LGBTQ forces were organizing for the future, I was worried about how the LGBTQ community would get too caught up in the anticipated win at the Supreme Court on marriage equality that was coming down the pike in 2015.

The onset of the Trump administration has certainly been a clarion call to snap out of it. And so many queer people have seen the threat and joined the Resistance.

But some recent exchanges and interactions I’ve had lead me to believe that many people, queer and straight, still believe that LGBTQ rights are secure and advancing. They point to public opinion polls, to cultural changes and to progress even in the most conservative corners of the country.

One person, educated in the history of the LGBTQ movement, told me that he couldn’t believe that the Supreme Court would undo something that the majority of Americans now supported ― marriage equality ― and implied a lot of the sounding of the alarm was for the conspiracy-minded.

I find this thinking to be naive and enormously dangerous.

It often doesn’t matter what the majority of Americans believe ― over 90 percent support universal background checks on gun purchases, after all, but we can’t get the legislation passed. The Supreme Court has handed down ruling after ruling that reversed precedents and defied the majority of Americans’ beliefs on voting rights, corporate money in politics, immigration and so many other issues. What is happening in our country right now is clear: a powerful minority is in control and is trying to get the fix in so that it can rule from the minority for a long time to come.

Let’s look at the facts:

Donald Trump’s Supreme Court pick Neil Gorsuch  wrote a dissenting opinion two weeks ago regarding Arkansas and birth certificates for children of same-sex couples, defining himself as the new hardline leader on the court for religious conservatives and inviting lower courts to view the Obergefell marriage equality decision not as settled law, but as open to interpretation, possibly allowing for religious or other exemptions for those opposed to marriage equality.

Days later the Texas Supreme Court refused to see Obergefell as settled, sending a case back to a trial court. Slate legal writer Mark Joseph Stern, in a piece headlined, “Marriage Equality Could be in Peril,” laid out the case last week for the how marriage equality, with Gorsuch in the lead and Justice Kennedy perhaps retiring at any time and replaced by another anti-LGBTQ conservative, could be overturned.

Mississippi last year passed the most far-reaching anti-LGBTQ law we have seen and just a few weeks ago a federal appeals court ruled that the law should be allowed to take effect. The law allows for businesses and government employees to decline service to LGBTQ people, and that includes bakers, florists, county clerks and and other government employees, based on religious beliefs. It allows for discrimination in housing and employment against same-sex couples or any individual within a same-sex couple.  . . . The law allows mental health professionals and doctors, nurses and clinics to turn away LGBTQ individuals. It also allows state-funded adoption agencies to turn away LGBTQ couples. With several of the Supreme Court’s conservatives seeming to welcome these exemptions, expect other states to move in the same direction and, again, with Gorsuch on the court and Kennedy perhaps retiring at any time soon, it’s frightening to think what the court might decide about such exemptions.

Texas joined Michigan, South Dakota and Mississippi in allowing bans on adoption to same-sex couples by state-funded adoption agencies. In the cases of both Texas and South Dakota, the laws were passed this year and seemed to fly under the radar of all the attention on Donald Trump. But they, too, get at that same issue of allowing exemptions to same sex-marriage, turning same-sex marriage into second-class marriage. Again, look for more states to follow this lead.
The Trump administration has thrown transgender students overboard, withdrawing guidelines on protecting trans students that were put in place by the Obama administration for schools nationwide. And the Education Secretary, Betsy DeVos, sees no problem with giving federal dollars to schools that discriminate against gay, lesbian, bisexual or transgender students.

Trump’s cabinet and undersecretaries include some of the most ardent foes of LGBT rights, from Housing Secretary Ben Carson and Attorney General Jeff Sessions to Health and Human Services (HHS) Secretary Tom Price and his director of the Office of Civil Rights at HHS, Roger Severino . . . .

Trump has essentially made LGBTQ people invisible. There was no presidential Pride proclamation in June, let alone a White House reception. Two surveys by HHS about older Americans and disabled people have removed questions about sexual orientation, refusing to collect vital data. And the Census Bureau dumped plans to finally include information about sexual orientation and gender identity in the 2020 census.

This is a vigorous attempt at a full-scale rollback by religious conservatives who’ve been part of Trump’s and the GOP’s base, and it’s already had some success. There is no denying it. Many are woke to it. But I’m afraid far too many LGBTQ people are not, still wanting to revel in victories, pointing to polls and to progress globally.

The United States, however, is right now led by an authoritarian whose party ― always hostile to LGBTQ rights ― has so far given him free rein to engage in destructive behavior against anyone and everyone.

None of us can believe any of the rights we’ve fought for are safe. But more importantly, we need to wake up and see that they are already being stripped away right before our eyes.

When Trump won the 2016 presidential election as a result of the Electoral College's failure to do its duty as envisioned by the Founding Fathers, I noted that emigrating from America might be an option that the husband and I might end up pursuing.  We have taken no action on this as yet, although we are remodeling our master bathroom - doing much of the work ourselves - to make the house more salable if things should come to needing to move.  We have no intention of making the same mistakes made by 1930's German Jews who failed to flee Germany while they had the opportunity. We will watch and wait, but have no intention odf sticking our heads in the sand as to what is happening - right before our eyes.
Posted by Michael-in-Norfolk at Monday, July 10, 2017