If Republicans Love Their Country, When Will They Show It? 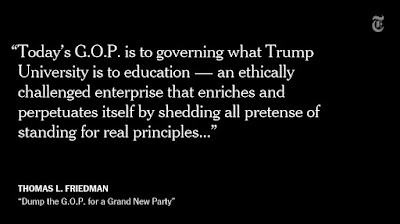 Republicans bloviate ad nausea about loving America and feign support for the U.S. Constitution and the "rule of law," yet by their actions tell a very different story.   In a piece in New York Magazine, Andrew Sullivan asks the question posed in the title of this post: when will Republicans show that their words are not totally empty?  When will they put America and the U,.S. Constitution first? Frighteningly, the answer to that question is not anytime soon given the moral bankruptcy of  today's Republican Party.  A column in the Washington Post by a conservative columnist who seems to belatedly opened her eyes to the true nature of today's Republican Party and the moral bankruptcy of today's GOP, connects the dots and argues that it is the party's moral rot that set the stage for the rise of Trump.  First these highlights from Sullivan's piece:

My mind keeps traveling back to that moment in the second presidential debate when both candidates were asked what they admired about each other. I have to say, sitting at home, the question stumped me. I guess in a pinch I could say I admired Clinton’s tenacity, doggedness, and ambition. They’re all good qualities in a politician. But Trump? Racked my brain. Has he done a single redeeming thing in his entire life? None that I could find in any biographies or news reports. Clinton’s answer — that she admired his kids — was a good try, but also manifestly untrue. Trump’s kids seem to me to have close to no moral compass, are utterly absorbed into the family cult, and follow the same truth-churning, money-grubbing, corner-cutting, ethics-free recklessness of their father. They’re a walking argument for a hike in the estate tax.

Which brings me to Don Jr. . . . . Now I agree with David French, one of the less tribal writers at National Review: “If you had told me last week that there existed an e-mail chain where a Trump contact explicitly tried to set up a meeting between a purported Russian official and the Trump senior team to facilitate official Russian efforts to beat Clinton, I’d have thought you’d been spending too much time in the deranged corners of Twitter.” And yet here we are.

These are the words that will resonate for quite a while, typed just 17 minutes after Don Jr. was told the Clinton dirt was coming from the Kremlin: “If it’s what you say I love it.”

This is not about being dumb. It’s not about being ruthless. It’s not about oppo research. It’s not even about dirty tricks. This is about a very basic level of patriotism. It’s about a deep question of how you were brought up and what your values are. And Trump values are foul. Yesterday, as if to prove the point, the paterfamilias revealed his own view of a case in which a foreign despot offered his campaign dirt on his opponent: “If you got a call and said, ‘Listen I have information on Hillary and the DNC,’ or whatever it was they said, most people are going to take that meeting, I think.” Even when it’s coming from a foreign enemy. And so we learn one more time: If it ever comes to a choice between Trump and America, Trump will pick Trump. There is a reason the Founders made the presidency — alone of all the offices of state — reserved for a natural-born American. There’s a reason every new citizen must swear this oath: “I absolutely and entirely renounce and abjure all allegiance and fidelity to any foreign prince, potentate, state, or sovereignty of whom or which I have heretofore been a subject or citizen.” The Founders were deeply worried that the republic could be corrupted by foreign influence, money, or power. No office was more critical in this than that of commander-in-chief. And it was in part for this exact contingency that impeachment was included in the Constitution. As ultra-right Republican Andy McCarthy just wrote in National Review:

The standard for impeachment, the commission of “high crimes and misdemeanors,” is not concerned with criminal offenses found in the penal statute books and suitable for courtroom prosecution. It relates instead to the president’s high fiduciary duty to the American people and allegiance to our system of government. . . . . The bickering over collusion ‘crimes’ misses the point. If an unfit person holds the presidency, the danger to our society is that he will abuse the power that he wields. The imperative is to remove him from office.

No crime need be committed. The question is whether we can trust this president to put the interests of the U.S. before himself or a foreign enemy — or some horribly compromised combination of the last two. If there is any doubt about this, the doubt has to be removed. That is what impeachment was invented for. It is to remove an unfit person who has proven himself willing and able to abuse the power entrusted to him.
And so we begin to get the answer to a particularly pointed question: How much do Republicans actually love their country? And when exactly will they prove it?

As for the GOP's moral bankruptcy that set the stage for Trump. here are highlights from the Post column:

The key insight from a week of gobsmacking revelations is not that the Russia scandal may finally have an underlying crime but that, as David Brooks suggests, “over the past few generations the Trump family built an enveloping culture that is beyond good and evil.”

We now see that, sure enough, the Trump legal team (the fastest-growing segment of the economy) has trouble restraining its clients, explaining away initial, false explanations and preventing self-incriminating statements. (The biggest trouble, of course, is that the president lied that this is all “fake news” and arguably committed obstruction of justice to hide his campaign team’s misdeeds.)

Let me suggest the real problem is not the Trump family, but the GOP. . . . the GOP evidences “no attachment to any external moral truth or ethical code.”

Let’s dispense with the “Democrats are just as bad” defense. First, I don’t much care; we collectively face a party in charge of virtually the entire federal government and the vast majority of statehouses and governorships. It’s that party’s inner moral rot that must concern us for now. Second, it’s simply not true, and saying so reveals the origin of the problem — a “woe is me” sense of victimhood that grossly exaggerates the opposition’s ills and in turn justifies its own egregious political judgments and rhetoric.

Only in the crazed bubble of right-wing hysteria does an ethically challenged, moderate Democrat become a threat to Western civilization and Trump the salvation of America. . . . .Indeed, for decades now, demonization — of gays, immigrants, Democrats, the media, feminists, etc. — has been the animating spirit behind much of the right. It has distorted its assessment of reality, giving us anti-immigrant hysteria, promulgating disrespect for the law (how many “respectable” conservatives suggested disregarding the Supreme Court’s decision on gay marriage?), elevating Fox News hosts’ blatantly false propaganda as the counterweight to liberal media bias and preventing serious policy debate.

“Obama bad” or “Clinton bad” became the only credo — leaving the party, as Brooks said of the Trump clan, with “no attachment to any external moral truth or ethical code” — and no coherent policies for governing.

We have always had in our political culture narcissists, ideologues and flimflammers, but it took the 21st-century GOP to put one in the White House. It took elected leaders such as House Speaker Paul D. Ryan (R-Wis.) and the Republican National Committee (not to mention its donors and activists) to wave off Trump’s racists attacks on a federal judge, blatant lies about everything from 9/11 to his own involvement in birtherism, replete evidence of disloyalty to America (i.e. Trump’s “Russia first” policies), misogyny, Islamophobia, ongoing potential violations of the Constitution’s emoluments clause (along with a mass of conflicts of interests), firing of an FBI director, and now, evidence that the campaign was willing to enlist a foreign power to defeat Clinton in the presidential election.

Out of its collective sense of victimhood came the GOP’s disdain for not just intellectuals but also intellectualism, science, Economics 101, history and constitutional fidelity. If the Trump children became slaves to money and to their father’s unbridled ego, then the GOP became slaves to its own demons and false narratives

It’s a party as unfit to govern as Trump is unfit to occupy the White House. It’s not by accident that Trump chose to inhabit the party that has defined itself in opposition to reality and to any “external moral truth or ethical code.”

The assessment is brutal, yet true, and I say this as a former GOP activist who is sickened by what the GOP has become.  As noted many times, the catalyst for this descent into something foul was the hijacking of the GOP base by the Christofascist.  Sadly, no one lies more frequently and evidence hatred towards others more than the self-anointed "godly folk."
Posted by Michael-in-Norfolk at Saturday, July 15, 2017