Will Republicans Get of the Trump Train Before it Derails? 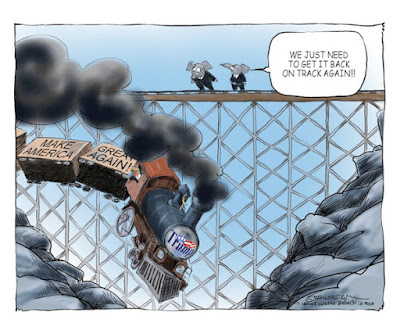 Other than perhaps John McCain - who has predicted more than once that additional shoes will drop before the Russiagate saga ends - and Lindsey Graham, most Congressional Republicans seem hell bent to go down with the the Trump ship or to use another analogy, to cling to the train as it flies off the washed out bridge.  Indeed, they seem willing to risk everything to ram through aspects of the party's reverse Robin Hood agenda before the Trump/Pence regime crashes and burns. I truly do not understand the mindset which would seem - barring a coup by Trump - to lead to self-immolation at some point down the road when even the most brain dead and/or race driven Trump supporters are going to realize that they have lost health care coverage and received a pittance in tax relief while millionaires have made out like bandits.  A column in the Washington Post makes the case for jumping off the train before it crashes and burns.  Here are excerpts:

“Will he tell the president ‘no’?”

This question was at the heart of Sen. Dianne Feinstein’s opening statement at Wednesday’s confirmation hearing for Christopher A. Wray, President Trump’s nominee as FBI director. Wray was there because the man who appointed him had fired James B. Comey for failing, as Feinstein put it, to “pledge his loyalty” to Trump and to soft-peddle inquiries involving Russian meddling in the 2016 campaign.

The test for Wray, Feinstein (D-Calif.) said, will be his “willingness to stand up in the face of political pressure.”

There is good reason to feel uneasy about having anyone appointed by Trump lead the FBI at this moment. It is obvious to all except the willfully blind that we now have a president who observes none of the norms, rules or expectations of his office and will pressure anyone at any time if doing so serves his personal interests.

We also know beyond doubt that this team will lie, and lie, and lie again whenever the matter of Russia’s exertions to elect Trump and defeat Hillary Clinton arises.

Donald Trump Jr. met with a Russian lawyer connected to the Putin regime after he received an email from an intermediary promising “sensitive information” about Clinton that was “part of Russia and its government’s support for Mr. Trump.” Almost as instructive were the number of outright lies the Trump camp concocted to try to disguise the motivation behind the encounter.  Feinstein’s suggestion that telling this president “no” has become the true measure of patriotism applies far beyond Wray. So far, Republican politicians, with a precious few exceptions, are failing this ethics exam. The revelations about Trump Jr. might have been the moment when Republican leaders at least started to grab their luggage in preparation for disembarking from the Trump train. After all, as Post blogger Greg Sargent underscored, there is evidence that the president himself cooperated in putting out the original lies about his son’s meeting. This may prove to be the wedge that opens up a larger examination of the president’s determination to cover up. Yet the GOP is having trouble kicking its Trump habit. . . . Vice President Pence’s effort to stay loyal to Trump while tiptoeing away from the latest disclosures is another sign of chaos. Marc Lotter, Pence’s press secretary, attempted to draw a bright line, saying of the vice president: “He is not focused on stories about the campaign, particularly stories about the time before he joined the ticket.” But there is no bright line. This statement should widen, rather than narrow, interest in Pence’s behavior because denying any relationship with Russia was central to the campaign that he was part of. It was also Pence who (in theory, at least) was in charge of vetting Michael Flynn, the national security adviser who had to resign after 24 days because of his own dissembling about Russian contacts.  Pence cannot be allowed to slink away from the administration whose cause he has advanced. If he’s starting to see reasons for breaking with Trump, he’ll have to do it outright and end his own collusion with one of the most disingenuous White Houses in our history.

The same applies to Republican leaders in Congress. When will they tell the president “no”? Feinstein’s question is the right one for Wray. It should haunt Paul Ryan and Mitch McConnell, too.