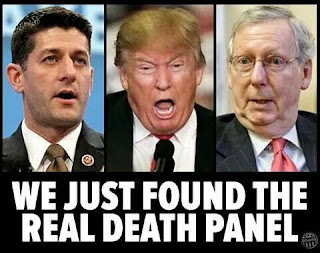 Mitch McConnell has unveiled his latest abortion of a healthcare "reform" bill that at the moment has failed to secure the support of 51 Republican Senators.  Why?  Because it still harms millions of Americans and would force them off of healthcare coverage - McConnell and his cronies describe this as  a "voluntary" decision ignoring the fact that tax cuts are worthless if one is not making enough income to pay significant amounts in income tax or pay insurance premiums - and seemingly double or triple counts various funds in a pathetic attempt to disguise the negative impact on citizens. The CBO is supposed to release its scoring of the bill on Monday and the  likely outcome is that the harm will be significantly worse than what is claimed by McConnell and his fellow GOP liars sycophants.  Meanwhile, Republicans continue to disingenuously  claim to care about "working families" and "Christian values." A piece in Talking Points Memo looks at the GOP's difficulties in selling a foul rotten fish.  Here are excerpts:

GOP leaders unveiled the Senate’s revised health care bill on Thursday, and the updated legislation included a version of a controversial amendment drafted by Sen. Ted Cruz (R-TX) that would allow insurers to offer cheap, bare-bones plans that cover few health care services as long as at least one plan per state complies with Obamacare’s regulations. To address concerns that Cruz’s amendment would lower prices for the young and healthy by making them skyrocket for the people who need a comprehensive insurance plan or have a pre-existing condition, the amendment purports to allocate billions in additional funding that states could use “to assist such health insurance issuers in covering high risk individuals.”

But as Sen. Susan Collins (R-ME) told reporters on Thursday, there is no additional money. Instead, the amendment takes money already appropriated in the bill for other needs and says it can be used for these payments to insurers under the Cruz Amendment.

Matthew Fiedler, a fellow at Brookings Institute’s Center for Health Policy, confirmed this double-dipping to TPM.

“The overall bill adds $70 billion to the stability fund,” he said. “But the Cruz amendment then redirects that same money to make payments to insurers designed to mitigate the problems that the Cruz amendment would create in the ACA-compliant market.”

“That funding will, of course, not be available to serve the stability fund’s other purposes,” he added.

Those other purposes include assisting the people booted off of Medicaid due to hundreds of billions of cuts in funding for the federal health care program, easing their transition into the individual health insurance market. It is also meant to provide funding for health savings accounts (HSA) that people could use to pay their insurance premiums.

Another piece in Huffington Post sums up the latest bill as follows:

At its core, however, the revised version of the Better Care Reconciliation Act ― which McConnell pulled two weeks ago because too few Republican senators planned to vote for it ― remains a vehicle for massive cuts to Medicaid, less financial assistance for people who buy private health insurance, and the return of skimpy junk insurance policies and discrimination against people with pre-existing conditions. Taxes on the rich would remain, but health care companies would enjoy a major tax cut.

This part of the bill is in addition to the sweeping changes the underlying measure would make to the health insurance system, including allowing insurers to sell policies with less coverage but higher deductibles and other out-of-pocket costs than are permitted under the Affordable Care Act.

The bill also would repeal the law’s individual mandate that most Americans obtain health coverage or face a tax penalty and its requirement that large employers offer health benefits to workers.

States would be allowed to waive that law’s requirements for coverage of core benefits ― such as hospitalizations, prescription drugs, maternity care and mental health. This would undermine protections for people with pre-existing conditions, who could be offered plans that don’t cover medical services and products needed to treat their ailments. People whose health coverage lapses for more than 63 days would be locked out of the insurance market for six months.

And insurers could charge older customers five times what they charge younger people, up from three times under the Affordable Care Act.