Sessions Spoke Behind Closed Doors to an Anti-Gay Hate Group 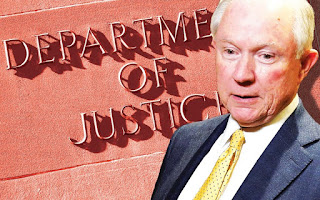 My "friends" who voted for Donald Trump and his anti-LGBT agenda remain shocked that I harbor anger toward them.  Some claim ignorance about the promises made by Der Trumpenführer to the Christofascists and evangelical Christians and expect me to forgive their laziness and intellectual sloth.  Others try to pretend that they can simply ignore the situation which only makes me believe that they fell for Trump's open calls to racism.  Neither will convince me to give them a pass for their treachery.  Now, the New Civil Rights Movement is reporting that Attorney General Jeff Session - a man with a long history of racial bigotry and contempt and loathing for LGBT Americans - spoke last night to a closed door session of the Alliance Defending Freedom, a leading anti-LGBT hate group. The media was barred for the event which suggests that something improper likely came down given the pending litigation before the Supreme Court over "religious freedom" claims of anti-gay zealots. Here are highlights on Sessions' inappropriate appearance:

Attorney General Jeff Sessions Tuesday evening will address an anti-gay hate group at a private, closed to the public function, and the Dept. of Justice is refusing to explain why. Worse, the group, Alliance Defending Freedom, is involved in a Supreme Court same-sex marriage case, leaving open the very real question of why would the Attorney General allow such an appearance of impropriety?

Buzzfeed's Dominic Holden first reported the event . . . Holden also notes he reached out to the DOJ, which refused to comment on why Sessions was speaking to the ADF. More importantly, he asked, "if it signaled [a] new DOJ position in court."  "Decline comment," was the DOJ's response, Holden says.

Right Wing Watch's Peter Montgomery reports tonight's event is the ADF's Summit on Religious Liberty in Orange County, California. He notes the ADF "is the largest of the Religious Right legal groups, engaging in culture war battles against LGBTQ equality and reproductive choice in the U.S. and increasingly around the globe. So why would the address of the attorney general to ADF, a group not normally shy about taking credit for its work, be closed to the media?" he asks.

"The Alliance Defending Freedom actively helped draft discriminatory legislation, worked to preserve laws criminalizing same-sex relations, and attacked the separation of church and state. ADF has been previously designated a hate group and Sessions’ appearance at this event, as the top law enforcement official in the country, brings in to question whether the attorney general intends to protect all Americans."

It's a valid question.

Sessions from the beginning of his tenure as Attorney General has made clear he has little intention to protect the most vulnerable of Americans, our children. In a joint decision with Education Secretary Betsy DeVos, he chose to rescind the Obama-era guidelines protecting the civil rights of transgender students.

Education Week, in noting Sessions' speech tonight, Tuesday elaborated on his decision to rescind the transgender guidelines, and ADF's reaction at the time. . . . "The Trump administration's move won praise from Alliance Defending Freedom, . . .