Watching the Downfall of a Presidency 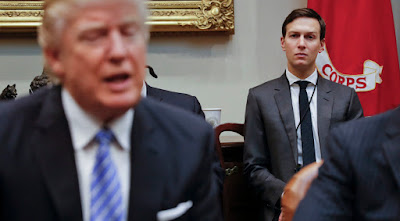 Watching the events unfold around Russiagate I am repeatedly reminded of Watergate except the current scandal has a much more sinister nature given that the apparent crime was conspiracy with a hostile foreign government.   Both Richard Nixon and Donald Trump display mental health issues, in my opinion, that rang from deep paranoia to megalomania not to mention a sense that they are smarter than everyone else and above the law. But with Russiagate, we see a similar arrogance and sense of something much more than mere entitlement on display by Donald Trump, Jr., and Jared Kushner.  Frank Rich, in a piece in New York Magazine  looks at the continuing unfolding of events. A piece in Talking Points Memo attributes the behavior of the main players to the ethos of the New York City real estate moguls where the wealthy see themselves as above the law and where shady dealings are far too prevalent.  The latter piece also argues that the Trump family players have no idea of the magnitude of the trouble that they are in as a consequence of this bubble like reality.  Some will ask where does Mike Pence fit into all of this despite his efforts to feign ignorance about everything even though he was in the midst of the Trump campaign?  From years of watching the self-anointed "evangelical Christian" leadership crowd, I believe that Pence's motivation stems from something different: the Christofascist view that the end justifies the means, be it lying or, in this case conspiring with an enemy nation.  The goal for Pence is furthering a quasi-Christian theocracy and special rights for Christofascists and this end justifies any means.  Here are excerpts from Rich's lengthy column:

There will be no single smoking gun that will bring down this White House. It will be death by firing squad — or perhaps a sequence of firing squads — as the whole story inexorably pours out of the administration’s smoldering ruins. This week’s bombshell has the feel of gallows humor. Trump Jr.’s panicked release of the self-incriminating emails is tantamount to picking up a loaded gun and shooting himself in the head. Why did Little Donald not do what the Trumps always do in these situations — let the press (in this case the Times) go ahead and report its incriminating findings, rail against leakers, and then dismiss the latest incontrovertible evidence of wrongdoing as “fake news”? Was Little Donald trying to protect his father from even worse revelations? To take down his brother-in-law even as his brother-in-law (a possible source of the emails) tried to take down him? To deliver a message from or to the Kremlin? For all we know, the released email chain may be only a small and relatively minor part of a much larger criminal web that stretches from Donald Trump’s tax returns to his and the Kushner family’s respective real-estate dealings in Russia and beyond. The authorities who matter — the investigators at the special counsel’s office and the FBI — are not telling us what they are up to. They may already know — or may soon know — of evidence far more incriminating than the revelations of the past 72 hours. Even this morning we are learning via McClatchy’s estimable Washington bureau that investigators are looking into possible coordination between the Jared Kushner–run Trump campaign digital operation and Russia’s “sophisticated voter targeting and fake-news attacks on Hillary Clinton in 2016.” The good news for those who want to see justice done is that this scandal not only resembles Watergate but also The Godfather — albeit a Godfather where every Corleone is a Fredo and not a single lawyer is as crafty as Tom Hagen, despite the fact that Little Donald’s private attorney has a history of defending clients from mob families. The level of stupidity of the conspirators is staggering: Not the least of the week’s news is that Kushner thought he could get away with omitting this Trump Tower meeting on the government questionnaire he filed to get his security clearance. (The $2.5 million that Charles Kushner donated to Harvard to gain his son admission was not money well spent.) Now it’s every man (and his lawyer) for himself as the president, having hidden from the press and the public ever since he returned home from his Yalta-themed tête-à-tête with Vladimir Putin, escapes to France, of all places. His press secretary is also in hiding, as is his chief of staff, Reince Priebus, who as recently as Sunday dismissed the Donald Jr. story as a “nothingburger” — Trumpspeak for the Nixon press secretary Ron Ziegler’s designation of Watergate as a “third-rate burglary.” About the only administration stalwart not remaining silent is the vice-president, whose statement following the release of the Donald Jr. emails let it be known that he was “not aware” of the Trump Tower meeting and that it had taken place before he joined the campaign. Mike Pence has clearly been boning up on Gerald Ford, and may already be brooding about the risks entailed if he should eventually be in the position to pardon the 45th president. Republicans in Congress have been slow to respond to this story, if they’ve commented at all. Is silence an effective strategy?  It’s not a strategy. It’s desperation. Much like their predecessors in the Nixon era, they keep hoping somehow it will all go away so they can get back to business as usual. After all, it was less than a month ago that David Brooks, writing in the Times, reassured them that there was “little evidence” of “any actual collusion between the Donald Trump campaign and the Russians” and that “most voters don’t really care” anyway. Prominent Republicans continued to use this script after the release of the Trump Jr. emails . .  . A furrowed brow is still what passes for bravery among Republican politicians these days.

They can run from reality and reporters, but they can’t hide indefinitely. As I’ve written before, the closer we get to the 2018 midterms, the faster Republicans in the House — and some of those up for reelection in the Senate — will scramble for the lifeboats. But by the time they wake up and see the looming iceberg, it may be too late to save their careers.

Trapping the Senate in Washington is not going to lead to the passage of the latest rewrite of the Senate health-care bill (whatever is in it). What we are likely to get instead is two weeks’ worth of television shots of Republican senators scurrying down the halls or shutting their office doors to escape reporters. Other things not happening this summer: tax reform, an infrastructure initiative, or the raising of the federal debt ceiling. The vacuum will be filled by the steady drip, if not flood, of White House revelations that neither the president nor his Capitol Hill enablers, apologists, and collaborators can stop. If McConnell were really canny, what he’d be doing right now is gaming out how his party will respond to the next looming constitutional crisis: Trump’s inevitable version of the Saturday Night Massacre, in which Robert Mueller is fired, and Rod Rosenstein along with him. For all of us, a little perspective is in order. Little Donald is not the story here any more than G. Gordon Liddy and those third-rate burglars were the story in Watergate. We are likely to reach a point when this week’s firestorm will be remembered mainly as a warm-up for conflagrations yet to come.

For the sake of the nation, I hope all of them fall, including Pence.  Some say but that would leave us with Paul Ryan, a man I see as utterly amoral.  This may be true, but a hopefully chastened Ryan and a severely damaged GOP reeling from Trump's fall may still be the lesser of the evils.
Posted by Michael-in-Norfolk at Friday, July 14, 2017

You are right, I think, that these actions of the tRump family will destroy this presidency. Unfortunately, I think you are wrong that they will suffer any personal consequences from their treason. Donald has the pardon in his back pocket, and they all know it. He WILL use it.