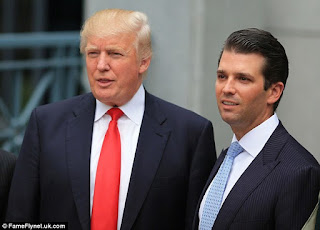 As numerous legitimate news outlets, such as Politico, New York Magazine, New York Times, and the Washington Post and others, are reporting - which excludes Fox News, a/k/a Faux News - Donald Trump, Jr., an arrogant cretin it would seem, released copies of e-mails today that many see as providing special prosecutor Robert Mueller, the "smoking gun" proving collusion between the Trump campaign and the Kremlin. While Donny, Jr., claims he released the e-mails for the sake of "transparency,"the reality is that the New York Times was about to disclose the e-mails' contents.   To paraphrase the Times, the emails make it crystal clear that one of Donald Trump's former Russian business partners had been contacted by a senior Russian government official and was offering to provide the Trump campaign with dirt on Hillary Clinton which "would incriminate Hillary and her dealings with Russia and would be very useful to your father.”  The email, also noted that “This is obviously very high level and sensitive information but is part of Russia and its government’s support for Mr. Trump.”  Vanity Fair looks at what Trump, Jr. has handed to Robert Mueller.  Here are excerpts:

For more than a year, Donald Trump and his associates have pushed back against allegations that his campaign colluded with the Russian government, which the president has called a “hoax” and a “witch hunt” orchestrated by Clintonworld. But a series of e-mails exchanged between the president’s son, Donald Trump Jr., and Rob Goldstone, a publicist and former British tabloid journalist linked to the Trump family through the Miss Universe pageant, suggests that the eldest Trump son not only sought compromising information on Hillary Clinton from a Kremlin-backed lawyer but was aware since at least June 2016 that the Russian government was working to help elect his father.

Trump Jr. received an e-mail from Goldstone informing him that one of his family’s former Russian business partners had received “official documents and information that would incriminate Hillary and her dealings with Russia and would be very useful to your father.” The e-mail chain, which began June 3, was also addressed to the president’s son-in-law and senior adviser, Jared Kushner, and then-campaign chairman Paul Manafort. “This is obviously very high level and sensitive information but is part of Russia and its government’s support for Mr. Trump.”

Trump Jr. responded, “if it’s what you say I love it especially later in the summer.” In a series of follow-up e-mails, he agreed to meet with the “Russian government attorney”—presumably Natalia Veselnitskaya, who later met with Trump Jr., Kushner, and Manafort at Trump Tower on June 9.

The e-mails between Trump Jr. and Goldstone are the first concrete evidence that the Trump campaign was aware of Russian government effort to help elect Donald Trump—months before the Obama administration made the Russian campaign known, and long before Trump himself acknowledged Russian interference. “The new joke in town is that Russia leaked the disastrous DNC e-mails, which should never have been written (stupid), because Putin likes me,” Trump tweeted on July 25. The day before, Donald Trump Jr. had gone on CNN to decry the Clinton campaign’s claims that the Russians were helping Trump as “disgusting” and “phony.”

The president’s son released the e-mail exchange Tuesday after learning that The New York Times was about to publish a story containing parts of his conversation with Goldstone, which the paper published minutes later. The acknowledgement that he was aware of Kremlin efforts to help his father become president, and his eagerness to meet with a Russian intermediary to solicit the promised information, follows a series of incremental reports from the Times, to which Trump Jr. has responded with ever-shifting explanations [lies].

On Monday, Trump Jr. hired New York-based lawyer Alan Futerfas, who has defended members of several major mob families. Collusion between Russia and members of the Trump campaign is one of several allegations being investigated by the F.B.I., under special counsel Robert Mueller, as well as by parallel inquiries by the intelligence committees in the House and Senate. Trump Jr. has said he would be “happy to work with the committee to pass on what I know,” in reference to the Senate panel.


In light of all of Trump, Jr.'s series of lies, ,  Trump, Jr., and Der  Trumpenführer himself now want us to believe that Trump senior knew nothing of the meeting that took place in Trump Tower that just happened to include his oldest son and his son-in-law.  As in Watergate, the questions become: what did the president know and when did he know it.  I suspect that he knew about all of it.