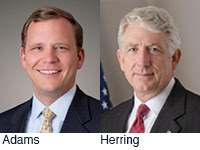 No, Republican Attorney General candidate John Adam's hasn't been outed for being gay - although he does seem a tad bit hysterical LGBT rights and same sex marriage, something that often is a signal of a self-loathing closeted Republican (think former Congressman Ed Schrock who I helped "out" in 2004).  No, instead, both the Washington Post and Richmond Times Dispatch (the pieces were noted in previous posts on this blog) did pieces on Adams that exposed him as a Christofascist religious extremist and just possible and anti-woman racist.   As a result of the coverage, the Republicans over at Bearing Drift - which touts itself as "Virginia's Conservative Voice" - are having absolute conniption fits.  One column attacks the Washington Post piece while remaining mysteriously silent on the Times Dispatch piece which was similarly unflattering to Adams unless one is perhaps one of the KKK protesters in Charlottesville yesterday.  In typical GOP fashion, the piece claims that direct quotes of Adams "were taken out of context," yet the clear take away of both Adams and Bearing Drift is that they believe a majority mob rule with minorities - including gays - relegated to a situation where they should be grateful for whatever crumbs of legal rights the majority might throw their way.  The Equal Protection Clause of the U.D. Constitute seemingly doesn't exist in Adams' universe.  Here are excerpts from the apologist piece at Bearing Drift:

This week, Washington Post columnist Laura Vozzella tried to sew together a mismatched tapestry of half-truths and out-of-context quotes from Republican nominee for Attorney General John Adams. The article attacked everything from his views on social issues to something he said to a newspaper in 1994. Simply put, Democratic AG candidate Mark Herring has the Washington Post doing his job for him.

Virginia voters passed a Constitutional Amendment to ban gay marriage. It’s the law, and if you are the Attorney General of Virginia, the AG has to defend the laws that have been passed by the voters.

That’s the main point of Mr. Adams’ argument — that the first problem is that anyone who believes in limited government should have issues with the way gay marriage was legislated from the Supreme Court. The second problem is that Virginia voters had a law on the books and Mark Herring did nothing to defend it.

In response to the author, I would point out that, in my opinion, Adams' approach to the law not only ignores the U.S. Constitution but also seemingly ignores Rule 3.3 of the Rules of Professional Conduct governing all attorneys licensed in Virginia, which provides in part as follows:

(a)  A lawyer shall not knowingly:
(1) make a false statement of fact or law to a tribunal;
(2) fail to disclose a fact to a tribunal when disclosure is necessary to avoid assisting a criminal or fraudulent act by the client;
(3) fail to disclose to the tribunal controlling legal authority in the subject jurisdiction known to the lawyer to be adverse to the position of the client and not disclosed by opposing counsel; or
(4) offer evidence that the lawyer knows to be false. If a lawyer has offered material evidence and comes to know of its falsity, the lawyer shall take reasonable remedial measures.

Religious belief does not equate to scientific, objective fact. The unfortunate truth is that Virginia has been on the wrong side of history many times since the founding years of the nation.  Far too many past attorney generals supported some of Virginia's darkest deeds.   We do not need an attorney general who thinks the majority gets to dispense rights to minorities as it sees fit and is willing to parrot ridiculous - and untrue - Christofascist lies.   Truth be told, John Adams is an extremist and he needs to be exposed as such to Virginia voters. I cannot help but wonder if Adams' law firm, McGuire Woods, will not come to regret Adams' candidacy before its over.