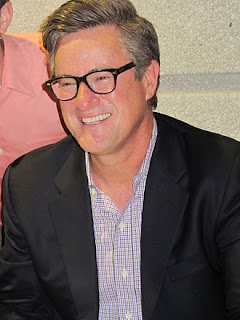 Nearly two decades ago I formally resigned from the Republican Party when I saw the GOP being hijacked by Christofascists who rejected knowledge and reason and who wanted to undermine the U.S. Constitution and make their foul version of Christianity the de facto established religion in America.  Many Republicans, including former GOP Congressman and TV host Joe Scarborough - and a number of my immediate neighbors - chose to close their eyes and pretended that the Republican Party still remained the party of their youth and James F. Buckley, Jr.  Enter Donald Trump and incessant lies and the GOP's willingness to turn a blind eye at possible treason with Russia and a horrific reverse Robin Hood agenda and Scarborough has final reached the point I did: It is simply impossible  to remain a Republican if one is a moral and decent person and a true American patriot.  The Daily Beast has details on Scarborough's decision to leave the GOP.  Here are excerpts:

It’s been a little less than two weeks since President Donald Trump delivered his unhinged tweetstorm against “Psycho” Joe Scarborough and “low I.Q. Crazy” Mika Brzezinski, and unfortunately for the Morning Joe co-hosts, the news cycle has since moved on to more pressing matters concerning the president’s first-born son.

The betrothed colleagues postponed their Fourth of July vacation to fire back at Trump on-air, and shared some thoughts on the president’s bizarre obsession with female blood with The New York Times, but their sit-down with Stephen Colbert on Tuesday night’s Late Show was their first televised interview since the debacle. And Scarborough came armed with big news.

In light of his recent disagreements with the president, along with the GOP members of Congress who continue to support him, Scarborough announced that he is leaving the Republican Party and becoming an Independent.

Asked by Colbert why other Republicans have not been as critical of Trump as he has, Scarborough said he thinks their tacit support of the president is “inexplicable.” He argued that the party has “betrayed its core values” since long before Trump took office, pointing to December 2015 when then-candidate Trump first called for a “total and complete” ban on all Muslims entering the United States.

“I said on the air, it’s very simple, it’s black and white,” Scarborough continued. “I said I can never vote for anybody in my party that said they were going to ban people for the god they worshipped.” He said he found Trump’s words and actions “disturbing” throughout the entire campaign, from the time he claimed to not know anything about David Duke and the Ku Klux Klan to when he said a judge from Indiana couldn’t be fair to him because he was of Mexican heritage.


“You didn’t have Republicans coming out and saying, I can never support Donald Trump because he’s racist!” Scarborough said. “Time and time and time again, they turned the other way, and they’re doing the same thing now. It’s actually disgusting. And you have to ask yourself, what exactly is the Republican Party willing to do? How far are they willing to go? How much of this country and our values are they willing to sell out?”

Scarborough may well be outraged by Trump’s various “racist” statements and policies, but the one thing that seems to have finally ended their on-again, off-again relationship for good was the president’s personal attack on Brzezinski.

In another Washington Post op-ed published late last month, the pair wrote, “The Donald Trump we knew before the campaign was a flawed character but one who still seemed capable of keeping his worst instincts in check.” But while the tape of Trump boasting about grabbing women “by the pussy” was not released until a month before the election, he made those comments in 2005.

Did becoming president really change Donald Trump, or did it take President Donald Trump to make Joe Scarborough realize how craven the Republican Party has become?


Having been a GOP activist for years and a City Committee member for 8 years, I understand that it can be hard to leave what one is familiar with and what one has worked for.  That said, at some point objective facts, morality and decency make it impossible to remain in a political party that has become something hideous.
Posted by Michael-in-Norfolk at Wednesday, July 12, 2017