The Reality Free World of Trump's Base 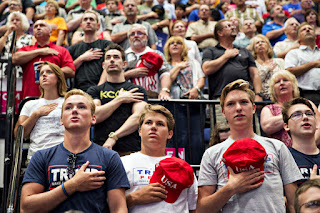 A piece in New York Magazine looks at the Kool-Aid drinking supporters of Donald Trump who continue to argue that any news stories - or anything else that reflects poorly on their Dear Leader  - is "fake news."  It's understandable that many find it difficult to admit that their were played for fools or allowed their baser - and racist - instincts to lead them into voting for an unfit individual who increasingly appears to have colluded with an enemy foreign power.   The levels of denial are mind boggling. Indeed, driving back from a court appearance for a client yesterday, I caught a portion  of Michael Smerconish's radio show where he was taking calls from Trump supporters.  Let's just say the abuse showered by some of the callers was shocking.  One caller even welcomed collusion with Russia and said that Putin "was our friend" and that the Russians were "Christians."  Here are highlights from the New York Magazine piece:

With the New York Times breaking the story of a June 2016 meeting involving Donald Trump Jr., Jared Kushner, and Paul Manafort with a Russian lawyer (according to Trump Jr. himself) who claimed to have damaging information on Hillary Clinton, the excitement is again mounting among Trump critics that (as an ABC headline put it) “fire peers out from Trump-Russia smoke.”

But, as the various stages of reporting on the meeting in June 2016 have played out, the reaction from Trumpland’s corner of the news media has not betrayed any fear that the president’s own family might have been caught colluding with an agent of a foreign power who sought to tamper with a U.S. national election. The New York Post’s Michael Walsh called the story a “big yawn” and an effort to revive a “resentful smear cooked up in the immediate aftermath of Clinton’s stunning defeat last fall.” . . . . Fox News is focused on undermining the idea that Veselnitskaya was a “Kremlin crony” at the time of the meeting. Kellyanne Conway answered a question from Chris Cuomo on CNN about the new revelations with the deeply entrenched Trump countercharge that his enemies have created the Russia story to distract attention from the administration’s brilliant successes. . . . What bothers me is, there does not seem to be any type of disclosure about Team Trump and Russia that shakes its aggressive self-confidence. And that may be because it had done such a good job of convincing its political base that all criticism is maliciously partisan. At Vox, Lindsay Maizland reports how deeply Trump’s “fake news” charge about the Russia investigation has been absorbed by his fans in precisely those heartland rural and small-town areas that did so much to lift him to the presidency: When I recently visited my hometown and one other small town in Michigan that went for Trump, I talked with residents about the investigation. Nearly every single person I spoke with said the same thing: The media just needs to leave Trump alone, and the Russia investigation is a distraction.

A message of total disdain for media reporting is certainly falling on receptive ears. As a survey from Pew Research records, among self-identified Republicans the approval/disapproval ratio for “national news media” is 10/85. . . . . This gives him, at least among “the base” and its own allied media outlets, an extra layer of heavy insulation against bad news. In Trumpland, to a considerable extent, bad news is by definition fake.

So how does one explain this embrace of ignorance and refusal to see objective reality?  In one of a series of special reports, The Economist looked at Trump supporters and found a sort of "group think" as part of the explanation  The piece is here. Another piece here found that racism had in fact player a role in the behavior of Trump supporters.  Here are highlights from the first piece:

“IT’S A WONDERFUL day under President Trump! Please leave a message,” chirps the answerphone at the Palm Beach Republican Club, which sits on a palm-tree-lined avenue with a crossroads at one end and the turquoise Atlantic at the other. If Mar-a-Lago is Versailles, then this is its local village, whose inhabitants get occasional glimpses of the royal carriages.

Palm Beach is about as different from rural Kansas as it is possible to be, yet the way the president’s supporters talk about him in both places is much the same: he’s a businessman, he’s trying to do the right thing, Congress is getting in his way, the media are painting him as a bad man which he’s not, and anyway the country was a disaster under Obama. In the time your correspondent spent in West Virginia, Kansas, Georgia, Alabama and Florida talking to mayors of small towns, local Republican Party bosses and ordinary folk who voted for the president, nobody spontaneously raised the lingering scandal over Russian meddling in the presidential election, and hardly anybody showed buyer’s remorse.

Go back 50 years, and if you knew someone’s income, you could predict, with reasonable accuracy, how they would vote. That is no longer true (see chart). From Florida’s golf courses to rural Appalachia, from Midwestern blue-collar suburbs to California’s bougainvillea-lined driveways, where some of the most prominent pro-Trump intellectuals grew up, the tribes that make up the president’s support are bound together by something powerful that has little to do with their economic fortunes.

To be fair, not everybody in America thinks it’s a wonderful day under President Trump.  Plenty of people have . . . . concluded that this president is a threat to the republic.

This special report is not about them. Rather, it is about the roughly 40% or so of voters—some 50m Americans—who have lived through the same events and like what they see. . . . . If you understand how they think about politics and what can change their minds, you can sketch the boundaries of the president’s support or, as his detractors might put it, what he can get away with.

The first thing to note is that most voters pay little attention. Those who follow politics tend to assume that everyone else does, too, but they are mistaken. According to the American National Election Study (ANES), a large survey run by Stanford and the University of Michigan and published in March, 94% of Trump voters did not attend a single political rally, speech or meeting last year.

So how do the vast majority of voters change their minds? Not by taking each issue, deciding what is important to them, determining which candidate is closer to their preferences and then voting accordingly. In “Democracy for Realists”, the most influential recent book on voting, Christopher Achen and Larry Bartels show that the opposite often happens: people may well decide which candidate they like and then ascribe policies they approve of to him or her, often incorrectly.

Most voters make political choices based largely on what people like them are doing, and rarely change their minds. For example, it is hard to think of two more different candidates, in temperament, style and policy, than Mitt Romney and Donald Trump, yet more than 90% of those who voted for Mr Romney in the presidential election in 2012 also voted for Mr Trump this time, according to the ANES. . . . Those who expect Republican voters to desert Mr Trump each time a scandal breaks should bear this in mind.

This kind of groupthink is so powerful that it shapes the way people see the world around them. Right after the election, and more than two months before Mr Trump took office, Republicans told pollsters that their personal finances were in much better shape than they had been the week before the ballot. Democrats said the opposite. The question had nothing to do with politics, and yet the answers given were somehow conditioned by the election.