The Normalization of Hatred in Trump's America Continues 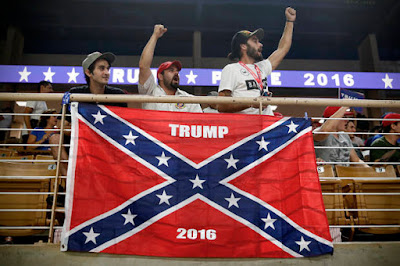 I suspect that history, if it focuses on the truth and not just the spin of Trump and his apologists will conclude that an irresponsible news media played a huge role in putting a dangerous narcissist in the White House. His calls to rally to hatred and bigotry were not properly exposed or opposed thanks to among other things the media obsession of false equivalency.  Under Der Fuhrer alt-right figures have slithered out from under the rocks where they long existed and Christofascist extremists are slated to hold numerous cabinet seats.  None of this is normal and, not too many years ago would have been viewed as reprehensible.  But not any more.  And now A&E is launching a program about the Klu Klux Klan that may have the effect of further normalizing this foul and toxic organization.  A piece in Salon looks at this unsettling new "show." Here are highlights:

[S]tarting Tuesday, Jan. 10, we’ll get a weekly look inside the lives of several families headed by members of the Ku Klux Klan called “Generation KKK.” Giving racism a platform, even under the guise of increasing the public’s awareness of its existence, is all the rage now.

Granted, that’s not the purpose of “Generation KKK.” In a Sunday New York Times article, A&E’s brass and the “Generation KKK” producer explained that the show has been in the works for more than a year and a half. That’s basically right around the time that Donald Trump’s presidential campaign began capitalizing on the sublimated bigotry and racial tension that’s been coming to the fore of our national dialogue.

Between the Klan’s rebranding of its intentions — it’s just about white pride now, never mind that inconvenient history of domestic terror and murder — and openly leaving literature on doorsteps in communities around the nation, the white supremacy organization has been steadily mounting its own campaign of normalizing hatred.

But this series exists, in part, because those efforts are working. The Southern Poverty Law Center has estimated that the number of independent Klan chapters across the United States was at 190 in 2015, a rise from 72 in 2014 and its membership may be as large as 8,000 people.

Two of the initial episodes of “Generation KKK” reveal a loftier intent than what the provocative title implies in that they immediately set up the series’ mission as one of anti-racist activism, focusing closely on the members of Klan families who want out — mostly mothers and children — as opposed to exposing the rituals and intentions of leaders such as Steven Howard, the imperial wizard of the North Mississippi White Knights.

“Generation KKK” may have a noble purpose, much in the way A&E’s “Leah Remini: Scientology and the Aftermath” has also served as a piece of anti-Scientology advocacy programming (albeit one that also happened to net the channel its highest-rated premiere in two years). But it’s also joining a channel that currently airs “Duck Dynasty,” the unscripted series that follows the delightful high jinks of the Robertson family including its homophobic patriarch Phil Robertson, who remembered the Jim Crow South as an idyllic period when black people had no complaints in a GQ profile.

Meanwhile, the number of people who don’t know that, say, the Southern Poverty Law Center does, is dishearteningly large. And maybe this series will lead to greater exposure and understanding of the groups that are fighting the good fight.

And for those who don't know, the KKK is also vitriolically anti-LGBT.  Just saying . . . .